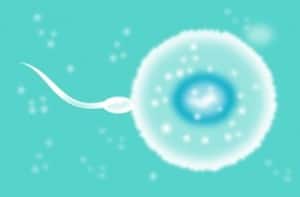 While we all know that just one sperm and one egg are needed to produce a baby, we also know that the average male produces a lot more (60 million to 100 million per ejaculation), just to make sure one sperm makes it. So the odds of just one produced sperm being able to make an actual baby are pretty slim. Yet Jason and Jennifer Schiraldi have little Kenley to prove that it is possible – a miracle, but possible.

Jason and Jennifer were high school sweethearts. They had always known they wanted children, but after nine years of being together, they still hadn’t conceived even once. So, like most couples, they visited the doctor to find out why.

“I’d never had any woman problems and you never think it’s the guy,” Jennifer stated. But the tests proved she was wrong. “They took a sample and we found out immediately: There’s no sperm.”

So, as it turned out, Jason and Jennifer were among the 30 to 40 percent of infertile couples in which the male was the infertile partner. But this determined couple was unwilling to admit defeat.

“We always wanted kids and I didn’t want to be the one who couldn’t do that for her,” Jason stated.

He underwent an aggressive infertility treatment which included a testicular biopsy: a procedure in which small amounts of testicular tissue are removed to search for viable sperm. Jason shared that the surgical procedure was extremely challenging. But searching for viable sperm proved to be even more challenging for the lab staff.

The surgeon sent down three total samples. They used microscopes to scan each and every tissue sample. They searched for nine hours in total. Out of all of the samples, only one viable sperm was found…just one.

That one sperm would be used in a procedure known as intracytoplasmic sperm injection (ICSI), a special in-vitro fertilization technique developed by Nina Desai, the director of the IVF laboratory at the Clinic Cleveland that Jason and Jennifer went to. Tiny amounts of sperm are stored in a drop of fluid inside a straw as thin as a sewing needle. The sperm can then be frozen until it is ready to be thawed and used.

This new method is the result of almost two decades of research and development to save the smallest amounts of sperm possible. It is hoped to be a success for other men like Jason that struggle with extremely low sperm counts. In fact, since Jason and Jennifer’s success, another patient has already signed up to start to procedure.

Still, as promising as scientists and researchers hope the procedure to be, they usually have more than just one sperm to perform the fertilization process. Desai was skeptical that Jason and Jennifer would be able to walk away with a viable pregnancy.

“We froze that one sperm and we saved the rest of the specimens,” stated Desai. “It was like a shot in the dark….We really had no hope of it doing anything.”

Desai and her team were even more disheartened when it came time to harvest Jennifer’s eggs. She had fewer eggs than normal.

With eight good eggs, the IVF experts went back to check Jason’s samples again, hoping they would find a few more sperm. They wanted to try and fertilize as many of Jennifer’s eggs as possible. But all they came up with was a few dead sperm. The one sperm was their only option.

“They got the one sperm and implanted the one egg,” explained Jennifer. “People don’t usually get pregnant when they only have one egg.”

Yet, despite all odds, scientists were able to fertilize the one egg with the one sperm. In three days, the fertilized egg started to divide into a viable embryo, which was then implanted into Jennifer’s uterus.

Sixteen days later, Jennifer was confirmed to be pregnant.

“It was very emotional,” Jason stated. “Miracle is not a large enough word to describe it. Of all of the fascinating and amazing things we do in the health care field, it’s amazing that this happens to us.”

Even the clinic joined in on the celebration.

“I was really surprised when I saw she had a positive pregnancy,” Desai stated. “This has been one of the real miracles in our IVF program.”

Jennifer had a pretty normal pregnancy – some morning sickness was her biggest complaint. Kenely did have to be delivered by C-section because she was breech, but other than that, she was a beautiful, healthy baby girl born on April 20th, 2011.

Now nine months old, Jason and Jennifer can’t help but be amazed at the wonderful miracle that is their daughter.

“It’s crazy. Sometimes I’m like, ‘Did we cheat?’” Jennifer said. “People ask if we’re going to have another child, but we made it this far to get her. I don’t know if I even want to press my luck.”

And while the Schiraldi family doesn’t plan to have any more children, they hope that their story can help encourage other couples faced with male fertility problems.

“People think once you’re stuck, you’re stuck,” Jason stated. “But there are people who can make wonderful things happen.”