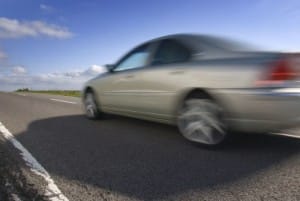 Speeding is against the law, there’s no debate there.  But, are there circumstances that excuse or even justify exceeding the speed limit?  How about if your wife is in labour and will likely require an emergency C-section?

That was the dilemma David Weber faced last March when his wife Genevieve went into labour on an outing at 38 weeks.

Panicked by recollections of the complicated and risky delivery his wife had endured with their first child, David made the decision to speed.

He was clocked at 170 km/hr as he rocketed to the general hospital in Brandon, Manitoba, where Genevieve was scheduled for a C-section 5 days later.  They were pulled over by RCMP to the tune of a $1,000 fine and a 15 minute delay.

The officer encouraged the couple to go to the nearer hospital in Portage la Prairie or call an ambulance to take them the rest of the way to Brandon.  They declined.

“He said, ‘If you go to Brandon, I don’t want to see you guys speeding,’” David quoted.

Half crying and wound near his breaking point David exclaimed, “we don’t have time for a lecture.”

The frightened couple drove off; peddle to the floor once again.  The officer radioed ahead, giving his colleagues a heads up that there may be a speeder headed their way.  Sure enough, half an hour down the road, they were stopped again.  There was another 15 minute delay.  This time the officer called an ambulance to take the couple the rest of the way to the hospital.

Before a justice of the peace, the Webers argued that they were justified in their race to the hospital.  They even had a letter from their doctor, explaining how near Genevieve had come to sustaining a ruptured uterus and how, by the time they arrived at the hospital, baby Anabela was in distress.

They hoped the jp would drop the ticket, or give David a reprimand.  No dice.  The justice of the peace lowered the ticket to $400, but did not overturn it.  As a result, David was called to a hearing with Manitoba Public Insurance, where his licence was suspended for five months and he may have to pay as much as $1,000 to renew his licence for years to come.

The Webers have turned to the media, to rally public support for their plight and shame the system into leniency in their case.  Dutifully, the media is admonishing the RCMP, the justice and MPI, all for their callous disregard of the dangers of the situation.  But, reading through comments after these articles, I’m seeing a lot of readers who aren’t so sympathetic to Mr. Weber.

Now, I’m not oblivious to the seriousness of the Webers’ situation.  Certainly, it would be frightening to discover that your wife and unborn child are in jeopardy, and certainly one would and should do everything reasonable to manage the situation to a safe conclusion.  The question I’m raising, and other have posed before me is, did David Weber behave reasonably?

The RCMP charged him, the justice of the peace upheld the charge, and Manitoba Public Insurance punished him further, because at every level of the system, his behaviour was deemed unreasonable.

He wasn’t just speeding a little.  He was going 170 km/hr, that’s 60 km/hr above the posted limit.  At that speed it can easily be argued that the greatest danger to his wife’s health, at that time, was his driving.  It can also be argued that he was endangering the lives of anyone who was sharing the road with him.

My dad taught me that getting pulled over, or worse getting into an accident, will slow you down far more than driving safely.  David’s speeding cost him 30 minutes in delay at two separate traffic stops.  Would he have reached the hospital much later if he was travelling at 110 km/hr?

I may be wrong, but I think Captain Panic has seen too many movies.  Reckless driving will not solve a crisis any more than putting your foot to the floor and shouting, “weeee ooooo weeee oooo,” out the driver’s window, will turn your car into an ambulance.  If your situation is too perilous to drive safely, it’s time to call for emergency assistance. – Jen R, Staff Writer