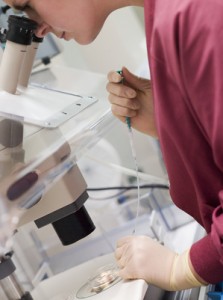 A study linking strongly the chance of a birth and the number of eggs retrieved in one cycle of in-vitro fertilization (IVF) has found that for a visibly higher live birth rate doctors should aim to retrieve around 15 eggs from the ovaries of a woman in one cycle.

The study was the most elaborate one to be done so far on the possible relation between live birth rates and number of eggs retrieved from a woman’s ovaries in a particular cycle. The researchers studied 400,000 IVF cycles and the findings have been published in the latest issue of Human reproduction journal.

Lead researcher Arri Coomarasamy of Birmingham University found that the number of live births increased with the increase in number of eggs uptil it reached 15. When 15-20 eggs were retrieved in a single cycle, the live birth rate leveled off and beyond 20 it steadily decreased.

The condition may lead to abdominal pain, swelling, nausea and vomiting, and in very rare severe cases it could be life-threatening.

IVF is one of the most used process of artificial fertilization used around the globe by many couples wanting to have a baby. In the process, eggs are surgically removed from the ovaries, fertilized under lab conditions with sperms and then the best possible embryo is implanted back into a woman’s womb. Often doctors prescribe a drug to stimulate the ovaries to produce more eggs.

“A standard stimulation should aim for 10-15 eggs, and we believe this is what is associated with the best IVF outcomes,” Coomarasamy said. “When the egg number exceeds 20, the risk of OHSS becomes high.”

The team of researchers analysed over 400,135 IVF cycles in the UK between April 1991 and June 2008 from the data at Human Fertilisation and Embryology Authority in UK.

They then used the data between 2006 and 2007 to form a predictive model that would best represent the current birth rates and latest practices adopted by doctors for IVF treatments. With the data they plotted a graph called as a nomogram showing a woman’s age, number of eggs retrieved per cycle and the live birth rates.

The researchers believes that doctors and their future patients could use the same nomogram, along with measures, called anti-mullerian hormone (AMH) and antral follicle count (AFC) tests to determine how many eggs were needed to be retrieved.

“If clinicians use AMH or AFC to estimate the egg yield, they can then use our nomogram to convert this estimated number of eggs into a predicted live birth rate, thus completing the prognostic chain to estimate the chances of what both they and the women want: a live born baby,” he said.

The research is clearly a breakthrough tool in ensuring that a baby is born through an IVF cycle without putting the mother in any risk because of over stimulation of the ovaries. It also gives a general safe figure of 15 eggs per cycle that may result in live birth.