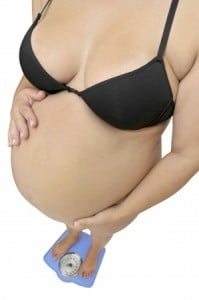 When it comes to pregnancy and weight gain, nothing could be more deceiving that the old adage, “eating for two.” A new study, supported by the NICHD (National Institute of Child Health and Human Development) explains why it isn’t true and why it’s putting many pregnant women and their babies at risk.

Conducted by the Maternal-Fetal Medicine Units (MFMU) Network, the study looked at data that had already been collected previously for a Network preeclampsia prevention study. It included more than 8,000 first-time mothers who were healthy at the onset of pregnancy, found that mothers who gained more than the recommended amount of weight during pregnancy were at a higher risk for complications.

“Women who gained excessive weight had more pregnancy complications, including hypertension in pregnancy, cesarean delivery and delivering a baby who’s large,” Cathy Spong, M.D., Associate Director of the NICHD Extramural Research Program and one of the authors on the study, told NICHD. “The development of hypertension in pregnancy can lead to even more complications, such as preeclampsia or toxemia in pregnancy, which is a pregnancy-specific condition that affects the kidneys and the liver…This can be life-threatening for both the mom and the baby, and the only treatment is delivery.”

What’s more, researchers found that pre-pregnancy weight wasn’t even a factor when it came to preeclampsia risks. Even if they were underweight prior to becoming pregnant, mothers who gained more than the recommended amount of weight during pregnancy were at an increased risk for high blood pressure, a precursor to preeclampsia.

Mothers who had gained more than the recommended amount of weight were also more likely to deliver babies that were large for gestational age. This can present complications during delivery, including the need for a cesarean birth.

Though generally safe in today’s world, mothers who deliver via C-section are at higher risk for infection and excessive bleeding. Additionally, recent studies have found that babies miss out on beneficial bacteria found in vaginal births, which could put baby at a higher risk for certain infections or health conditions later on in life.

“Women who deliver a baby who is large are at risk for delivery complications for that baby. The shoulders can get stuck, and you can even damage the nerves of the baby’s arm. It also increases your risk of cesarean delivery,” Spong said. “Although safe in general, as you have more cesarean deliveries, your risks increase, so it’s best to avoid that first cesarean so you don’t have to have subsequent cesarean births.”

There are also risks to infants who are born large for their gestation age are at a higher risk for certain complications, including injury during birth. Previous research has also indicated that these babies may have low blood sugar or other glucose regulation issues at birth.

But researchers found that only 17.5% of all mothers stayed within the recommended guidelines, only 9.5% had weight gain below the recommendations, and a whopping 73% of women gained more than they should have during pregnancy.

Spong, attributes the problem to the mistaken belief that pregnant women really are “eating for two,” when they really should only be eating about an extra 300 calories per day during pregnancy.