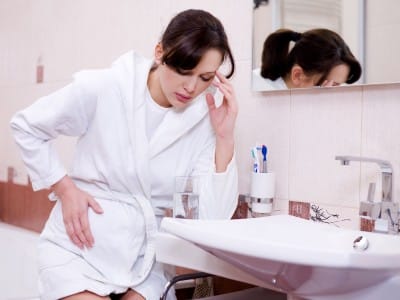 In the study, conducted by Dr. Gary Stanziano of Alere Health and his colleagues, data was compiled on 81,486 postnatal women between the years of 2004 and 2011. Each woman was asked if morning sickness had interfered with their daily activities. Of those women, about 6.4 percent said that nausea and vomiting had impacted their quality of life during pregnancy; 1,800 said they did not need medical intervention for their morning sickness and 3,300 said they needed medical treatment, including hydration help.

“Indeed, it’s hard to tell whether the effects seen in the study were due to nausea and vomiting or to the low weight gain these women experienced,” stated Dr. Jennifer Wu, an obstetrician and gynecologist at Lenox Hill Hospital in New York City, who was not involved in the study. “Poor weight gain has previously been shown to be associated with preterm delivery and babies born small for their gestational age.”

“The findings underscore the importance of recognizing morning sickness and managing it” said Dr. Stanziano. “This should not be a condition that’s taken lightly.”

Currently, there aren’t any FDA approved options for women experiencing severe nausea and vomiting during pregnancy. However, Stanziano does say that there are many therapies – hydration therapy, nutritional supplements, off-label medications and change of diet – that can be used for severe morning sickness and any woman experiencing this troubling condition should talk to their doctors.