Home » Study: Having Fathers in Birthing Room may Actually Result in MORE Pain

Prior to the 1970’s, fathers weren’t allowed in the birthing room, but then studies suggested that pregnant women needed fewer painkillers if their partner was present while giving birth. And so, today, it’s almost expected for the father to be by his partner’s side as she deliver . . . only, a new study now suggests that doctors might have had it right the first time around by asking fathers to wait outside. 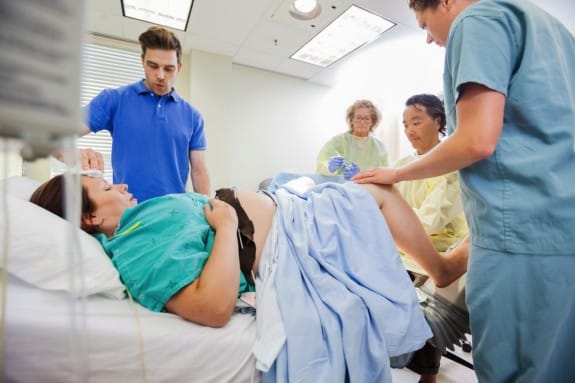 Well, in at least some cases, anyway.

This information comes after the researchers gave 39 women “pinprick” laser pulses on their fingers and then studied their ratings on the intensity of the pain. Electrical brain activity of the women was measured to examine any relation between their pain reports and brain activity. Women were also asked to complete a questionnaire that measured the extent to which she either sought or avoided ‘closeness’ and emotional intimacy in their relationships.

According to the results, the more patients avoided intimacy in their relationships, the more pain they experienced when their romantic partner was present. This was evident, not just in their reports of pain, but in their brain activity as well.

In contrast, those that sought intimacy and closeness in the relationships had no variation in pain when their partners were in the room. And this makes for an interesting argument against the former studies that found having a partner present in the delivery room actually reduces the level of pain felt during delivery.

“Overall, this study suggests that partner support during pain may need to be tailored to individual personality traits and coping preferences,” Dr. Katerina Fotopoulou of UCL’s Psychology & Language Sciences, told the Telegraph. “Individuals who avoid closeness may find that the presence of others disrupts their preferred method of coping with threats on their own. This may actually maintain the threat value of pain and ultimately heighten [an] individual’s pain experience.”

And French obstetrician, Michel Odent, went so far as to blame fathers for the increase of Cesarean sections back in 2009. He said that having a male partner in the delivery room can make a woman more anxious, slowing the production of oxytocin, a hormone that helps during the labor process.

But Dr. Fotopoulou wouldn’t go quite that far.

“The different results of this controlled experiment [from those in the past] could suggest that some of the previous results may not necessar[ily] relate to the sensation of physical pain, but the broader meanings and needs associated with childbirth,” Fotopoulou said. “The physical and psychological nature of labor pain may simply be different than other types of pain. Future studies could test how having a partner present during labor affects the pain felt by women who tend to avoid closeness in relationships.”