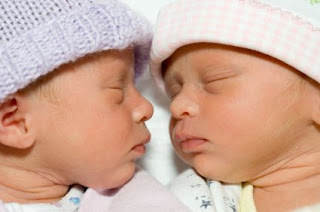 The babies that were conceived with IVF were far more likely to be admitted to neonatal intensive care and to be hospitalised in their first three years of life.

Oddly, findings from 21 controlled studies showed embryos that had been frozen shortly after they started to divide had a better, or at least as good, outcome in terms of premature birth and birth weight as children born from fresh cycles of IVF or another common assisted reproductive technique called ICSI (intracytoplasmic sperm injection).

The same cannot be said for twins born after assisted reproductive therapy (ART) when compared with naturally conceived twins.

It is known already that ART twins are at higher risk of problems such as low birth weight and premature delivery than singletons around the time of their birth, but, to a large extent, these risks exist as part of the problems associated with multiple births in general.

Until now there has been conflicting evidence about whether assisted reproduction itself is responsible for adding to the number of problems seen in ART twins.

As a precaution, experts have recommended transferring only one embryo per IVF cycle wherever possible.

To explore the risks, researchers in Australia and the UK looked at perinatal outcomes and hospital admissions for all twin children born in Western Australia between 1994 and 2000.

To make sure they were comparing like with like, the investigators matched the ART twins with naturally conceived, non-identical twins of different sexes.

They found that twins conceived following ART treatment had a greater risk of poor perinatal outcome, including preterm birth, low birthweight and death that the naturally conceived non-identical twins.

And ART twins had a nearly two-thirds higher risk of being admitted to neonatal intensive care and were more likely to be admitted to hospital during the first three years of their life.

Researcher Michele Hansen, of the Telethon Institute for Child Health Research in Western Australia, said couples undergoing fertility treatment should be made aware of this and should consider the benefits of opting for single embryo transfer.

“It is reassuring news about the embryo freezing.

“But the issue of IVF twins is concerning which is why we are trying to move towards single embryo transfer in as many women as possible to give these children the best start in life.”