Home » Study: Risk of Wound Complication Reduced with Stitches than Staples after C-section

Women undergoing C-section during their delivery either receive surgical staples or sutures (stitches)at the end of the operation. A new study, the largest to date, has now found out that women receiving sutures have a 57 percent less chance of wound complications than those receiving staples, thus clearly favouring the stitches over staples. 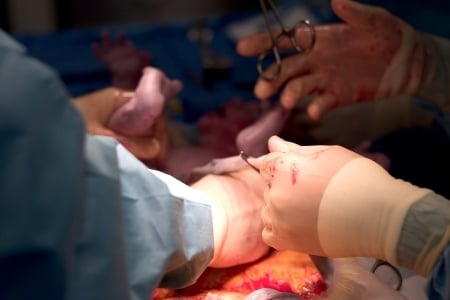 Senior author Vincenzo Berghella, M.D., director of Maternal Fetal Medicine in the Department of Obstetrics and Gynecology at Thomas Jefferson University said that the current research addressed the growing concern raised by many previous studies.

“There has been ongoing debate in the field about the use of sutures versus staples.C-sections are a common procedure in the United States, and yet we still haven’t established the best way to close these incisions.”

In the United States, a third of all deliveries are via caesarean section. In China 47 percent of deliveries are through C-sections. A 2013 study had shown that more than 50 percent of doctors preferred staples over sutures because of the ease of use, faster closing on incisions and especially in the case of overweight women where deeper incisions had been made.

“This study was designed to examine whether the evidence supports a specific closure method to decrease wound complications,” says first author, Dhanya Mackeen, MD, MPH, who was a Jefferson fellow at the time the study was conducted. “This study clearly shows that women who undergo C-section have fewer wound complications after suture closure than after staple closure,” she adds.

The study was conducted at three hospitals namely the Thomas Jefferson University Hospital, Lankenau Medical Center, and Yale-New Haven Hospital. 746 women who had a caesarean section were divided into two groups; one where they had stitches after operation and the other where staples had been used.

The researchers looked at a number of wound complications including infection, wounds that re-opened, and those that developed a build-up of fluid — either blood or lymphatic fluid — around the scar.

Doctors prefer the ease of stapling because it is faster, but the researchers found that suturing only takes 9 minutes more than stapling and is lot safer for women ensuring less wound complications later.

“Based on these results, we recommend that C-section incisions be closed with stitches rather than staples,” says Dr. Berghella, who has written a number of evidence-based guidelines for Obstetrics and Gynecology and is also the current president of the Society for Maternal-Fetal Medicine.

It may be good for pregnant women to inform about their choices beforehand to the doctor if they are having a C-section.