Peggy Young had asked to take a break from heavy lifting at her UPS job, only to be told by her boss to take an unpaid leave. Peggy, who says the company gave other non-pregnant light duty, felt she was being treated unfairly and decided to sue the company. 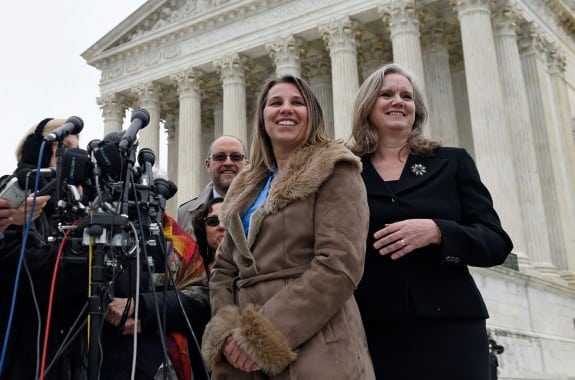 Peggy lost her case in the district court, and in the Fourth Circuit, who said the company had created a “pregnancy-blind policy.”

Peggy pushed on to the U.S. Supreme Court where she finally received a 6-3 decision, ruling in her favor.

“The Court has put employers on notice: pregnancy is not a reason to discriminate. The Court said that if you accommodate most non-pregnant workers who need it but not most pregnant workers who need it, you may be found guilty of violating the Pregnancy Discrimination Act,” Marcia D. Greenberger, Co-President of the National Women’s Law Center in a statement in response to the ruling.

“Whey, when the employer accommodated so many, could it not accommodate pregnant women as well,” the Court asks.

It’s the same question a lot of pregnant women have been asking.

But there isn’t an answer at this point. In fact, the Equal Employment Opportunity Commission, which issued guidelines in July 2014 that would have granted blanket protections to pregnant workers under the Americans with Disabilities Act was shot down in the very same Court that ruled in Peggy’s favor.

“The EEOC clearly will have to go back to the drawing board based on the Court’s decision,” Barry Hartstein, an employment lawyer with Littler Mendleson, told Forbes.

And, in almost the same light, the Court gave a nod to UPS, saying: “We agree with UPS to this extent: We doubt that Congress intended to grant pregnant workers an unconditional most-favored-nation status.”

So, if a company provides a worker or two with special accommodations, that doesn’t mean they have to supply those same accommodations to all pregnant workers.

But the EEOC isn’t giving up just yet.

They’ve identified pregnancy-related limitations under the Americans with Disabilities Act Amendments Act and the Pregnancy Discrimination as a national enforcement priority through 2016.

And Peggy isn’t giving up just yet either. But she will have to take her case back to the Fourth Circuit to see if they’ll back her after the Supreme Court’s ruling.

What do you think? We’d love to hear your thoughts!