Home » Surprise! Woman Who Thought She Had Food Poisoning Was Actually In Labour

When Florida mom Crystal Gail Amerson woke up with stomach pains at 4am last Sunday night her first thought was she had food poisoning.  Instead, three hours later she became a mom for the second time!

“I had Chinese food the night before and I kind of figured maybe I had food poisoning or something like that,” The new mom told the Penisicola News Journal.

Unaware she was actually 37 weeks pregnant, Crystal was about to welcome her second child.

At 5 a.m. as the pain worsened, she woke her fiance and they called an ambulance.

“The stomach pains were just excruciating and I could hardly move,” She recalled. “I think it was about 6:30 (a.m.) when (the ambulance) got there. … It escalated so quickly that I was having contractions and we figured out kind of what was going on because at first we really didn’t know what was going on.” 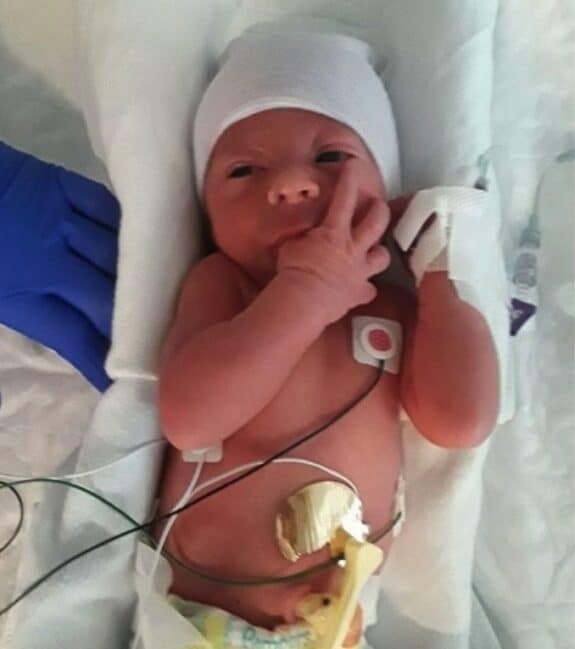 The paramedic who helped deliver Oliver had never delivered a baby on his own before, so there were many firsts.

Despite already been through one pregnancy, Crystal said this time was very different. She didn’t experience anything out of the ordinary like morning sickness and also didn’t have much extra weight gain.

“I gained a little bit of weight, but I think with my first baby I didn’t notice either,” she said. “I never gained that pregnancy shape, really. And then I wear scrubs to work because I work at a retirement home for Alzheimer’s and dementia patients. So I guess the way they fit me as well, it was hard to notice anything or tell anything.”

The new dad said the event was very surreal.

“The whole first day, I felt like a scene from a movie that everyone’s seen, where they’re walking down the hall slowly and everyone is zooming past,” he said. “Just a blur.”

While Crystal has been released from the hospital, Oliver is still in the Neonatal Intensive Care Unit while doctors monitor his appetite.