Surrogacy is typically a process in which a woman carries (and sometimes biologically parents) the child of another couple or individual. But a rare medical phenomenon almost caused a surrogate to lose her own child in the process. 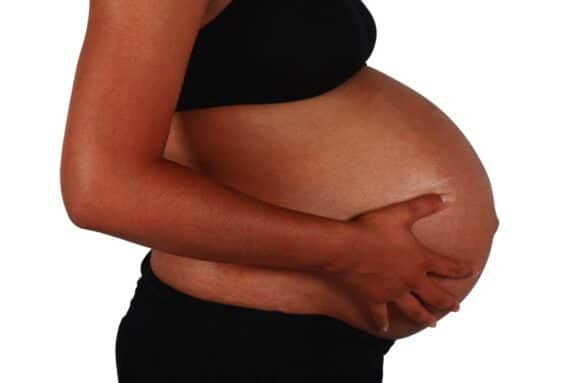 Jessica Allen, 31, had decided to act as a surrogate just six months after the birth of her second son, Jairus. She thought it would give her the chance to give another family the blessing of a child. Plus, it would allow her to stay home with her own two children.

“I wanted to stay at home with my sons rather than return to my job as a senior caregiver, and we decided we’d put the money toward buying a house,” Jessica said in an interview with The New York Post. “I chose to work with San Diego-based agency Omega Family Global. Soon, I was matched with the Lius, a Chinese couple who wanted to hire an American surrogate, as the practice is illegal in China.”

Jessica acted as a gestational surrogate for the Liu family, which means she didn’t have a biological tie to the male embryo that was implanted into her uterus in April of 2016. Nine days later, blood tests confirmed that the implantation had been successful; Jessica was pregnant. She and her husband, Wardell Jasper, abstained from intercourse until they were cleared by the IVF doctor, per her contract, and they used a condom, as advised. But when she went in for an exam, doctors discovered two babies instead of just one.

“I was a bit scared, but I heard the Lius were thrilled to be having twins,” Jessica said.

She was given an extra $5,000 to cover the expenses of a second child and thought nothing more of it. She went on assuming that both babies belonged to the Lius.

“Not once during the pregnancy did any of the medical staff provided by the agency say that the babies were in separate sacs,” Jessica explained. “As far as we were concerned, the transferred embryo had split in two and the twins were identical.”

But then Jessica gave birth.

She says she didn’t get to see the infants right after they were delivered (despite allegedly being told she could have 10 minutes with them after they were born). Instead, the infants were whisked off to the neonatal intensive care unit, where the Lius were waiting.

Jessica knew nothing about what the boys looked like until Mrs. Liu came to visit the day after the delivery, but as soon as she saw the photo, she knew that something had to be wrong.

“I told her, ‘Wow! They look different,’ before she snatched back the device,” Jessica said. “Little did I know that I’d hit the nail on the head.”

But even then, Jessica didn’t press. She figured she had to be wrong. Then, just a little less than one month later, she received a strange text message from Mrs. Liu.

“Just days before we moved into our new house, I received a WeChat [Chinese messaging app] message from Mrs. Liu,” Jessica said. “She sent me a picture of the babies and said, ‘They are not the same, right?’ followed by, ‘Have you thought about why they are different?’ . . . A week later the boys, who were still in California, had DNA tests, and the agency told me the results . . . Mike was a biological match to the Lius, while Max had my genes.”

It turns out that Jessica had experienced a medical rarity known as superfetation, a process in which a woman becomes pregnant while she is already pregnant. For Jessica, it had occurred, despite the use of condoms, and despite following all the agency’s recommendations. But the agency and the Lius didn’t see it as much of a miracle.

“Omega contacted me to say the Lius expected between $18,000 and $22,000 as compensation,” Jessica said. “We’d already spent most of the money we earned from the surrogacy contract, but now we were apparently on the hook for thousands of dollars.”

Instead, they wanted Jessica to pay out of pocket to get her own son back.

“To my disgust, a caseworker from the agency lined up parents to adopt him and ‘absorb’ the money we owed the Lius,” Jessica said. “Or, if that didn’t work out, the Lius were thinking of putting Max up for adoption, as they were still his legal parents . . . I told the agency in no uncertain terms, ‘We want our son,’ but we would still be responsible for the bill if we kept him . . . It was like Max was a commodity and we were paying to adopt our own flesh and blood.”

Ultimately, Jessica and her husband hired an attorney to get their son back, and to have their “fees” with the agency eliminated. On February 5, Jessica finally won. Her son was given to her in a Starbucks parking lot, renamed him Malachi, and it’s been a joy ever since.

“The moment was incredibly emotional, and I started hugging and kissing my boy,” Jessica said. “It’s now been nearly nine months since we got Malachi, and he is doing well. He’s beautiful. He’s healthy and his personality is hilarious. He loves his big brothers, is learning to walk and is starting to speak . . . Wardell and I, who got married in April, weren’t planning to expand our family so soon, but we treasure Malachi with all our hearts.”

Still, Jessica hopes that her story serves as a warning to other women considering surrogacy.

“I don’t regret becoming a surrogate mum because that would mean regretting my son,” she said. “I just hope other women considering surrogacy can learn from my story. And that a greater good will come out of this nightmare.”