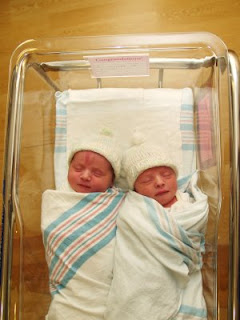 A new survey conducted by the Twins and Multiple Births Association has found that moms of twins or triplets have almost twice the average risk of postnatal depression.

The association, who surveyed 1000 moms, found that 17% of mothers who had a multiple birth experienced PND, compared with an average of 10% among all mothers. Another 18% of mothers of multiples were not sure if the feelings they had amounted to postnatal depression.

A few of the women reportedly walked out on their babies but returned, while others felt alone and cried regularly. Some harmed themselves and others contemplated suicide.

The survey found that mothers who suffered PND reported less sleep and less help from family and friends than non-sufferers. They were more likely to have received poor quality antenatal care or to have developed pregnancy complications. Some of the mothers said health visitors promised to drop off leaflets about depression, but did not do so. Others said doctors advised that they could not be treated for depression while breastfeeding.

It has been found that women are more likely to suffer if they have had depression before, do not have a supportive partner, have a premature or sick baby, or lost their mother when they were a child.