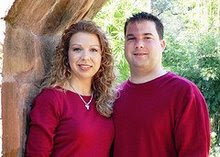 After 2 unsuccessful tries at pregnancy, Amanda and Thomas Stansel are expecting sextuplets.

The Texas couple began trying for a family shortly after their 2006 wedding. Amanda, a thyroid cancer survivor and diabetic, had trouble conceiving. She turned to fertility treatments that involved stimulating her ovaries to produce eggs, followed by insemination.

Her first pregnancy produced twins, but she lost them at 18 weeks. The second pregnancy failed as well. A home pregnancy test in late March confirmed another pregnancy.

“The third time, I ended up getting these six,” said Amanda, 32, patting her belly.

Her doctor, Dr. Brian Kirshon, a Houston high-risk pregnancy specialist thinks that there will be a better outcome in she get to 28 to 30 weeks. He has managed and delivered many triplet-plus cases, including the Chukwu and Collins multiples.

Multiples have a high risk of premature birth, which contributes to a host of medical problems. The Stansel babies have an early advantage: Each is growing in its own placenta. The best scenario is for Amanda to deliver six babies weighing 2½ — 3 pounds each, Kirshon said. Even then, the children will likely spend weeks, maybe months, in neonatal intensive care.

If Amanda successfully delivers six living babies, she will join a small sorority of women worldwide. Estimates place the number of sextuplet births globally at less than 200 — and not all of those children survived past infancy.

In 2006, the latest year available from the Centers for Disease Control and Prevention, just 67 children nationwide were born from quintuplet (five) or larger pregnancies. Government data on sextuplets cannot be released for privacy reasons because there are so few sets.