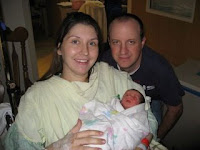 It has been a big week for Mega Multiples! First Digna and Victor Carpio announced the arrival of their sextuplets, now the Phillips family welcomes quints.

Kelly Phillips gave birth to five babies at The Woman’s Hospital of Texas on Saturday, October 25.

John, Becca, Ali, David and Kate made their television debut on Thursday and doctors say they’re doing amazingly well.Three girls and two boys will join their 18-month-old brother at home as soon as they gain a bit more weight.

Kelly did such a great job growing these babies, they are all big enough at birth to breathe independently. Here are their weights as per the couple’s website:

Doctors were thrilled that Phillips was able to carry the babies for 33 weeks. The average gestation for quints is 27.4 weeks.

“I’m feeling pretty good and I feel blessed to have babies that are healthy and well,” Kelly Phillips said. “And we’re anxioius to bring them home.”

As you can imagine, the couple was a little stunned when they first learned they would have five more babies.

“We were in shock, but once we went through the first trimester and started picking names, we were ecstatic,” Phillips said.

The babies will hopefully be home in the next few weeks, but before that the couple will have to figure out how to squeeze a family of eight into a three-bedroom house. Then they can look forward to a few years of bottles, diapers, sleepless nights and endless joy.