Home » Texas Toddler Has Half Of Her Brain Removed, Makes Full Recovery

When Sandra Salerno describes her daughter, Lillian Grace, she talks about all the milestones the child is reaching, saying, “She’s very active, loves playing with dolls, likes to try to do everything that her big sister does. She’s walking now and tries to do her own little version of running – she never was able to walk before we did brain surgery, so her personality is really started to come out.” But little Lillian wasn’t always so active and cheerful, and parents Neal and Sandra were bringing her many different doctors, when finally a diagnosis was made, and the parents had to make the heartbreaking decision to let doctors remove half of the toddler’s brain. 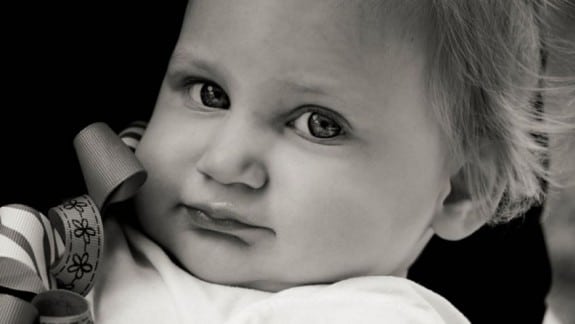 Just before Lillian Grace’s second birthday her parents noticed that she wasn’t reaching any of typical milestones. One of those said milestones was the size of the her head, which had measured a bit small for her age. This condition is called microcephaly. However, because the tot was born four weeks early, the Salernos had thought her small head size was due to her prematurity. It wasn’t until after she began to undergo early intervention occupational and physical therapies, that her parents started to understand the severity of her limitations. Only eight months old, the Salernos took her to a pediatric neurologist where they did an MRI scan of her head.

Sadly, their worst fears were confirmed when the scans came back. Sandra recalls, “We just knew looking right away that something wasn’t right because the right side of her brain was way smaller than the left side. And that’s when [the doctor] told us that Lillian had a condition called polymicrogyria, and that it encompassed 90 percent of the right side of her brain.” Polymicrogyria is a malformation of the brain, which is primarily marked by a large number of small folds in the brain tissue. In addition to causing developmental delays in Lillian’s case, it can also cause vision loss, muscle weakness or paralysis, neurological problems and epileptic seizures. The severity of the condition determines what course of treatment can be followed, either medication or surgery.

As a mom, Sandra was devastated by this news, but she was far from giving up. She set out to find the cause of her daughter’s condition. Her pregnancy with Lillian Grace was relatively normal, up until the 36 week mark, when she had suffered a placental abruption and the child was delivered via emergency C-section. Doctors thought that the polymicrogyria might be something genetic. However, after no genetic link was found, Sandra started doing her own research. She recalls how Lillian Grace wouldn’t respond to her when spoken to. “She wasn’t looking over or responding to me when I was talking to her on her left side,” Sandra said. “I started Googling hearing loss and polymicrogyria, and what popped up was CMV – I had never heard of it before.”

CMV is cytomegalovirus, which is a common viral infection that can affect nearly everyone without any symptoms. It spreads from person-to-person through contact with bodily fluids. However, in pregnant women it can be dangerous as an active infection. Dr. Gail Demmler, an infections disease specialist and CMV researcher at Texas Children’s Hospital says, “CMV is the most common virus most people have never heard of. Most of the time, when their babies are diagnosed with CMV, mothers haven’t heard of it – but it’s also a virus that every woman should know about.”

Armed with new knowledge, Sandra set out to pinpoint the exact cause of her daughter’s illness. After much footwork and research, it was found that Lillian Grace’s CMV infection was congenital, meaning that Sandra had become infected with the virus while she was pregnant, and passed it onto her unborn daughter. Sandra now believes that more doctors need to know about it. “I don’t blame it on the doctors that were treating me, it’s kind of going back to the curriculum in medical school – maybe it’s not talked about enough,” she said.

Demmler recommends that every woman should know about her CMV status and inquire at their local OB-GYN for a test. While a firm diagnosis of polymicrogyria brought about a little closure for the family, it was very short lived. Lillian Grace soon began having seizures, as many as 300 a day, up to 25 per hour, mostly in her sleep. The Salernos eventually sought the help of Dr. Michael Quach, a pediatric neurologist at Texas Children’s Hospital. Quach and a team of other pediatric neurologists had feared that Lillian Grace’s condition would only worsen, so the team took her case to an epilepsy specialist conference for input. The response Quach said, was rather unanimous that Lillian should undergo a hemispherectomy surgery, also known as radical removal of the right side of her brain.

“Counterintuitive as it may seem, you can actually function fairly well with just one half of the brain,” Quach said. “So in her case in particular, we felt very comfortable disconnecting the right side of the brain from the nervous system.” If Lillian Grace’s condition had continued untreated, doctors warned the Salernos that their daughter would eventually enter into a vegetative state. “Eventually, they said that she would die of the seizures if we did nothing,” Sandra said. “So the decision was pretty much made for us, but still heartbreaking for a parent…but without the surgery we wouldn’t have her.”

In August 2013, little Lillian Grace underwent the 8-hour surgery, performed by Dr. Daniel Curry, a pediatric neurosurgeon, along with his team at Texas Children’s Hospital. Curry says, “The majority of children going through hemispherectomy have a profound improvement in their function: They move better, they think better, frequently, children finally begin speaking. [Lillian Grace] was a great candidate for this type of procedure because all of her seizures were coming from just one side of her brain…and she was young…so she had all sorts of development that she could reroute and reschedule.”

In the weeks following the surgery, Lillian Grace seemed to make leaps and bounds in her recovery. Doctors had warned Sandra and Neal that it could have taken up to 6 months until she was back at her baseline. However, the little fighter began to crawl across the hospital room only 10 days post surgery. Since undergoing the procedure, the Salernos have only been seeing improvements in their daughter. “Post-surgery, she’s a different child than she was before,” said Sandra, who now uses her free time to work with organizations like StopCMV.org and MaddiesMission.org to educate other women on the importance of being tested for CMV. Sandra says, “To go through what we’ve been through is heartbreaking, but imagine losing your child, we’re the lucky ones.”