Home » The Benefits Of Exercising While Pregnant 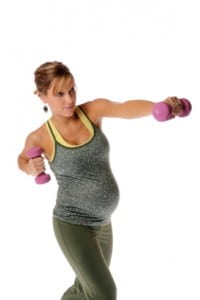 Mercola has a great article about the extensive benefits to mom and baby from exercising while pregnant. According to a new report, physicians should recommend low to moderate levels of exercise to their pregnant patients, even if they have not exercised prior to pregnancy.

Exercise can strengthen and improve overall musculoskeletal and physiologic health as well as pregnancy related symptoms.

Some of those exercises are:

Previous studies have shown that:

Aside from optimizing your baby’s nutrient supply and avoiding annoying aches and pains during pregnancy, exercising during this time has other health benefits, including:

So sticking to your exercise regimen while you are pregnant can go a long way to insulate you from the pre- and post-partum depression episodes that plague so many pregnant women. Numerous studies have found that exercise is at least as good as, or better, than antidepressants for depression.

The main reason for this is because physical exercise changes the level of serotonin in your brain. It also increases your levels of endorphins, your “feel good” hormones.