A healthy, well-balanced diet during pregnancy is important for your baby’s development. Mostly, that means consuming a variety of lean proteins (beans, lentils, chicken, fish, etc.), dairy (or a dairy alternative that contains vitamin D), whole grains, fruits, and vegetables. But what about foods that you shouldn’t eat? Are all the “forbidden” items dangerous, or can you consume some of them in moderation? Where’s the line between truth and exaggeration. We’re going to separate myth from fact to help ensure that you have the best chance at a happy, healthy pregnancy. 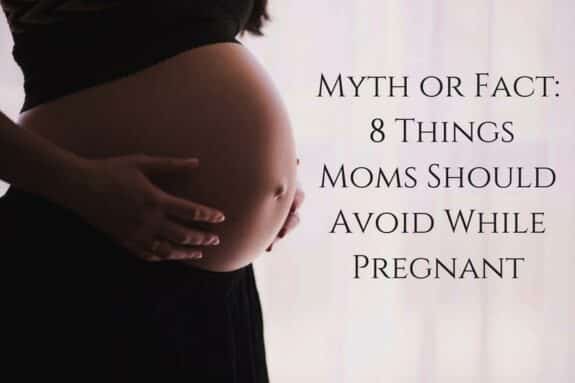 FACT – Expectant Mothers Should Avoid All Raw and Undercooked Meats

Expectant mothers should avoid any and all raw or undercooked meats – and not just beef, chicken, and pork. That rule also extends to raw fish, shellfish, and seafood (sorry, mums, that means most sushi, too). Much of this is due to the risk of contamination with salmonella, toxoplasmosis, and coliform bacteria. However, there are other potential risks with raw shellfish; there are numerous seafood-borne illnesses that can place both you and your baby at risk. Some can be eliminated if cooked to the proper temperature, but be aware that some algae-related bacteria may still be present in certain types of seafood, even after cooking.

MOSTLY FACT – Raw Eggs Can Give You Salmonella

Raw eggs – including those harvested from free range and backyard chickens – carry the risk of salmonella contamination. As such, expectant mothers should avoid them completely. That also extends to any foods that may contain raw eggs (raw cookie dough, homemade ice cream, homemade mayonnaise, homemade Hollandaise, etc.). But – and this is a big exception for those of you that love your cookie dough ice cream, eggnog, and Hollandaise sauce – if the food product is made by a commercial manufacturer (i.e. commercial Caesar dressing, commercial eggnog, etc.), it was made with pasteurized eggs and should thereby be safe. Hollandaise sauces may also be safe at some restaurants – just be sure to ask if it is commercially bought or at least cooked some to reduce the risk of salmonella poisoning.

Imported soft cheeses may contain listeria, which carries risks for both you and your baby. Found mostly in unpasteurized dairy products, it can result in miscarriage, an infection in you and/or your baby, premature labor, and, in severe cases, it may even result in death. It is the same bacteria that can be found on deli meats and some other packaged pre-cooked meat products (i.e. hot dogs, smoked seafood, pate that is not shelf-safe), but it can also find its way into uncooked vegetables and uncooked meats. Most of this is due to cross contamination (from water, soil, or by coming into contact with a carrier animal or its unpasteurized milk). You can reduce your risk by avoiding all unpasteurized soft cheeses (pasteurized soft cheeses and the products made from them are fine), deli meats, and unpasteurized milk products. Fruits and vegetables can also be cooked and should be washed thoroughly to avoid the risk of cross-contamination. Also, pay attention to the news and watch for recalls on produce items.

We’ve all heard the warnings over caffeine, and most expectant moms do try to limit their intake, but are you really a horrible parent if you’re unable to give up your morning brew? Absolutely not! In fact, most studies indicate that a moderate intake of caffeine is perfectly fine (under 200 mg per day – or about two cups of coffee). However, it is important that you stay mindful of your caffeine intake; it does carry some pretty scary risks if you overdo it, including an increased risk of miscarriage, low birth weight, premature birth, and even withdrawal symptoms for baby when they are born. Because it is a diuretic, it can also increase your risk of dehydration from fluid loss, and it may even cause malabsorption and/or loss of calcium through your urine. So, again, be mindful of your intake and keep it to no more than two cups of coffee per day (or less than 200 mg of any other caffeine type).

Alcohol consumption is a pretty hot debate topic – one that some expectant mothers will stand by and fight for because they’ve been given the okay by their doctor. However, Growing Your Baby stands behind complete abstinence from alcohol during pregnancy. As of right now, there is no amount considered safe for consumption, and no stage in which it is considered safe. Early on, organs like the baby’s heart are forming. Studies have suggested that alcohol consumption during this critical time could lead to heart defects. Alcohol can also increase a mother’s risk of miscarriage. As baby grows and develops further, the baby then becomes at risk for certain developmental issues, such as poor brain development or Fetal Alcohol Spectrum Disorders (FASD). There have been mothers who have consumed moderate amounts of alcohol and given birth to a baby with FASD, and then there have been others who drank heavily during pregnancy but gave birth to a perfectly normal and healthy infant. That is why our stance on this is that it’s simply too much of a risk to take.

Fish is a wonderful source of lean protein, and it contains several beneficial nutrients, including vitamin D. Certain types of fish, such as salmon, trout, herring, and sardines also contain omega-3, which is important for baby’s neurological and visual development. As such, expectant mothers really should consume fish at least a couple times a week. However, there is a risk of mercury in certain types of fish, including orange roughy, swordfish, king mackerel, shark, ahi tuna, bigeye tuna, marlin, and tilefish. These types of fish should be avoided completely during pregnancy. Expectant mothers should also limit their consumption of white albacore tuna to no more than six ounces per week.

FACT – All Fruits and Vegetables Should Be Thoroughly Washed Before Eating

Although fruits and vegetables are an essential part of any healthy diet, consuming them unwashed can lead to illness from toxoplasmosis, which can be caused by a parasite found in some soils. A good washing can reduce your risk of contracting this potentially dangerous condition. To be safe, we also recommend washing any fruits or vegetables that claim to be “pre-washed.” Please also note that commercially and organically grown fruits and vegetables may also harbor other contaminants (i.e. salmonella, listeria, etc.) if they have come into contact with other dangerous food items. Cooking can eliminate some of the risk, so we do recommend cooking as many foods as you can to reduce your risk of contracting an illness. Also, watch for potential recalls on food items on the news since it is sometimes the difference between illness and health.

Some substances, such as cannabis and over-the-counter drugs, may have value while not pregnant. However, these substances – along with any illicit drugs and cigarettes – are simply too dangerous to use while pregnant. Smoking and cannabis can restrict the nutrient flow, which can increase baby’s risk of a low birth weight. Both can also increase your risk of premature birth. Illicit drugs are dangerous at any time, but they can cause serious problems for your developing baby. And, as far as over-the-counter medications go, there are some that may cause issues for you or baby while you are pregnant. Examples include ibuprofen (Motrin and Advil), and Naproxen (Aleve), nicotine patches, Aspirin (Bayer, Excedrin Migraine), any medicines containing phenylephrine or pseudoephedrine (Claritin-D, Advil Cold & Sinus, Tylenol Cold Multi-Symptom, and Alka-Seltzer Plus Day), castor oil, and medications containing brompheniramine (Dimetapp Cold and Allergy).