Over the years, we’ve learned that where there are natural disasters, there are newborn babies. Conditions are sometimes compromised, but usually these births are welcomed with excitement and joy. Unfortunately, a disaster like the Super Typhoon in the Philippines has quite a bit of tragedy mixed in with the bits of joy. In Tacloban, at the Eastern Visayas Regional Medical Center, those two extremes couldn’t be more apparent.

More than 9 billion people were affected by the recent super Typhoon; many were already living in poverty, and now they have lost what little they had. Outside the Eastern Visayas Regional Medical Center, residents are trying to put their lives back together, but progress is slow. Inside the hospital, doctors are at a loss for how to properly treat sick and injured survivors; 16-year-old Elvie Udtohan’s newborn daughter is one of the smallest of them all.

Elvie’s family had attempted to find a way out of the storm-wrecked country; they’d to the Toclaban airport, hoping to catch a ride on a military cargo plane to Manila. There, they could stay with family and give Elvie the chance to deliver her baby in a safe and sterile hospital. Unfortunately, after spending the night with hundreds of other survivors, all of which were desperately hoping for a flight out of the country, the Udtohans learned that they would not be leaving.

Angry, disheartened and scared, the family had no choice but to return to the city, the place where homes, bodies and lay strewn in heaps of wreckage after last week’s storm. Not long after they returned to the city, what they’d feared the most started to happen – Elvie went into labor at only 32 weeks pregnant. The Eastern Visayas Regional Medical Center was their only hope.

Elvie’s daughter was born Saturday morning, and since that time, the entire family has taken turns keeping a careful watch over the tiny, to-be-named 1.3 kilogram baby girl. Wrapped in plastic and cloth to keep her warm, she clings to life. The oxygen, antibiotics and IV fluids are the only signs that she’s receiving any medical care at all. It’s not really anyone’s fault; the resources just aren’t there. And Elvie’s daughter isn’t alone. 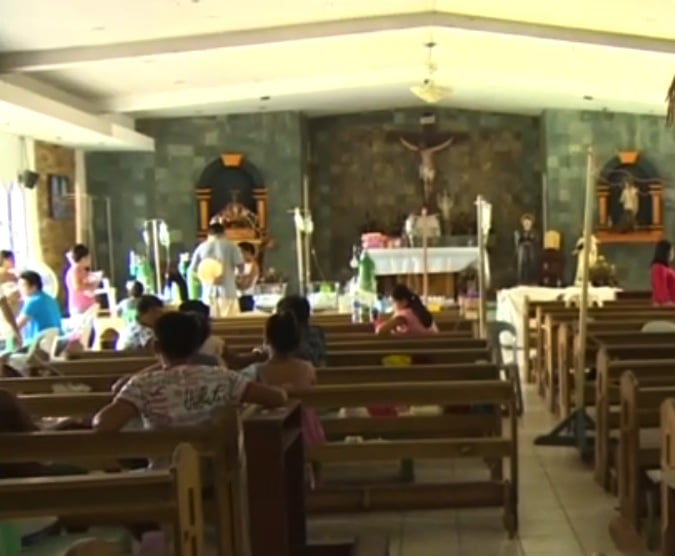 Another 26 babies have been born inside the Eastern Visayas Center. At night, the entire chapel is lit by candlelight because there isn’t any electricity in the hospital. The frailest of the infants are located near the altar – the hospital’s current NICU. Mothers still receiving care and the healthier, stronger of the babies lay in the wooden pews inside the chapel. No matter where they are stationed in the chapel, parents and family members of the infants do their best to help swaddle or fan the babies, hoping to help them maintain their body temperature since the incubators can’t be used. Those at the front are having oxygen pumped manually to them because there aren’t any machines to help them breathe. 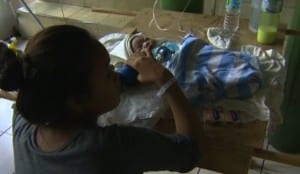 Mustacisa was one of the 26 babies in the chapel. Like some of the other infants, her mother and father had to hand-pump oxygen into her body to force her lungs to work. But at just days old, the tiny infant died; her condition was just too critical. But there has been joy inside the chapel as well. Catherine Pindot’s son, born inside the chapel on Monday, has been sent to the pews, and may actually be able to leave soon.

No one knows which path Elvie’s tiny daughter will take; obviously the family is hoping for the best. Unfortunately, until medical supplies (like blood) and vital equipment (like generators to supply electricity) start reaching the hospital and surrounding care clinics, the outcome for many of the country’s injured, sick and fragile will remain in the balance.