When Ben Tallowin offered to give his son a trendy ‘Beckham’ style haircut, he had no idea that it would set in motion a chain of events that would later save the toddler’s life. 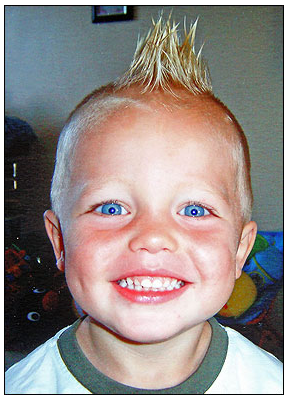 Just before he was about to start Ben found a couple of bumps just above Maddox’s spine and neck area.

Not taking any chances, the little boy’s parents took him to the doctors to be checked out where bloodwork came back saying that there were problems with his white bloodcells.

Twenty-four hours later, they were sent to Addenbrooke’s Hospital where Maddox was immediately put on a course of chemotherapy for the next four months.

Through Christmas and his third birthday, as Maddox continued to fight his disease, some days brought good news while some were difficult.

“He kept getting infections like chicken pox, paraflu and an infection in the line taking blood in and out of his chest. He pretty much spent four months solid in one little hospital room.”

Now, out of the hospital and in remission Maddox still has to make several hospital trips to fight the infections he gets almost everyday as the treatments have destroyed his immune system.

Doctors say that the three year old will also need chemotherapy and intensive steroid treatment for another three years to totally eradicate leukemia. The family right now, is just in awe of the little child who has endured so much.

“He is such a brave little boy. He has up days and down days, but he takes everything in his stride. We are so proud of him, and so glad we caught it early.”