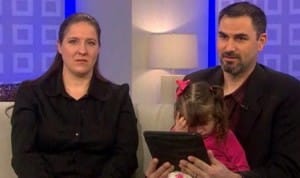 She is barely two years old and already proving to be an inspiration to all. The brave little girl called Katie Verdecchia had half of her brain removed to stop her from suffering 50 seizures a day. But contrary to being bed-ridden, the toddler has already learnt to walk just two and a half weeks after the surgery.

Katie suffers from an inherent condition called Aicardi Syndrome. With this neurological disorder, the structures connecting the two sides of her brain are missing leading to brain malformation and malfunction.

Aicardi usually affects the whole brain but in Katie’s case it was concentrated on the right side.

Her parents from Portland, Oregon noticed there was something wrong with their baby when she  began having short spasms at just a month old. Initially doctors thought it was normal, but the Verdecchia’s took her to the hospital when the spasms became regular.

Tests revealed that Katie was suffering from the disorder that is so rare it only affects about 500 people in the world.

It caused her to have daily seizures, hampered development and doctors also found lesions at the back of one of Katie’s retina. She was given medications to improve her motor development and control the seizures, but none could effectively curb the problems.

Undeterred by the constant hospital rounds, Katie began to grow as a lovable child. In May her mother wrote in her blog,

“Despite setbacks with her health, Katie has continued to grow and learn. She is most people would term the ‘cruiser’ stage of toddlers and moves very quickly now. Her personality continues to grow as well and she responds so much better to toys and people. More eye contact and giggles and laughter.’

However, at the end of August they learned that their daughter was having continuous seizures 24 hours a day and it could turn fatal. It is then that they agreed for the surgery that would maybe lead to a normal life for Katie and reduce drastically the risk of sudden death.

‘This surgery gives us a chance at life, and a longer one for our daughter.’ Said mother Maryalicia. 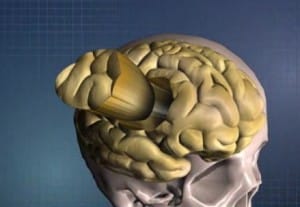 On 22 November a team of doctors led by neurosurgeon Dr. Gary Mathern disconnected the two sides of her brain in an eight hour long operation. They removed the centre of the right side of the brain and found that her frontal lobe was never fully formed, which caused her to not have movement on her left side.

Within 72 hours of the operation, Katie’s seizures had stopped. Doctors also hoped that because most of her learning had been through the left part of the brain, she would recover quickly. That is what Katie proved by beginning to walk just 2 weeks after her surgery.

Maryalicia said, “She is standing alone and unassisted for 1-2 minutes at a time. She is bending over to play with toys and gotten herself off the floor once with pulling herself up on something. She can also now, turn on her iPad, unlock it, AND pick apps to play.” 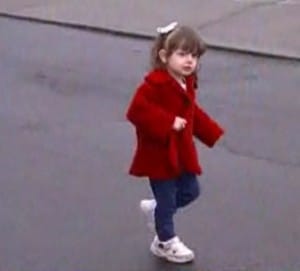 She also notices that Katie is smiling more, focusing more and is hopeful that she will soon learn to speak.

According to Dr. Mathern,

Kids with Aicardi’s generally already have speech problems. In this case the left side of her brain, which is usually used for language, is still there. All we can do it wait and see what develops.”

“The doctors are very optimistic for her. They say to give her two months post surgery to heal physically and one year to see her potential. Based on other children’s progress we are dreaming new dreams!’

‘I stay positive because attitudes are contagious. You have to be strong for your children.’ She rightly concludes.