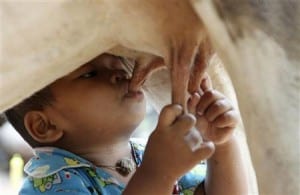 It is the image that has many shocked – an 18-month-old toddler from Nokor Pheas village, 195 miles from the Cambodian capital, suckling directly from a cow because his parents are jobless and have transferred to Thailand in an attempt to gain employment to support the family.

Tha Sophat has become and internet sensation after photos surfaced over the weekend showing the tot mirroring what he saw a calf doing a few weeks ago.  Presumably hungry,  the little boy’s grandfather revealed that he has been feeding himself this way for 2 months and has become accustomed to getting his meals directly from the ‘source’.

Villagers, however, are not happy with the practice and have asked the Tha’s grandfather to make him stop.

When the grandfather pulled him away, the boy cried, so he let him continue, he said.

‘They blame me and have told me not to allow him to suckle from the cow anymore. They say the boy will be ashamed when he grows up and that he will be naughty,’ he said.

Since Saturday, he has limited the feedings to once a day.

‘His health is fine, he is strong and he doesn’t have diarrhea,’ said Um Oeung.

While I think this toddler is brilliant for figuring out how to feed himself, I worry that he may get bovine tuberculosis and brucellosis, two bacterial diseases associated with consuming raw milk. There is also the issue of any illnesses that he can pick up from the teat not being cleaned after the calf has fed or from when the cow is lying on the ground.

Hopefully the family will be able to find something else to fill his belly until his parents return.