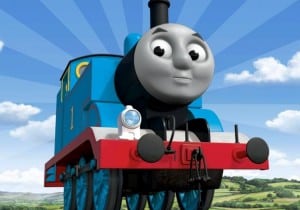 Three-year-olds usually love imitating their favourite cartoon or movie characters they watch on TV, but one young boy has become so obsessed with one of the shows that all he does now is speak in phrases taken from the show.

The story of the toddler named Max has shocked everyone and dramatically brought the ill effects of too much television for the kids into the foreground.

The three year old spends more than five hours a day watching the popular television show ‘Thomas the Tank Engine’ and because he is so involved with the show, he has cut himself totally from other children at his nursery. He rarely plays or runs along with them and instead lives isolated in the world of Thomas the Tank Engine, often repeating phrases from the show.

Doctors fear that too much cartoon has had a long term effect on his developmental and communication skills. The medical fraternity has been so alarmed that the boy’s case has been reported in the Journal of Developmental and Behavioral Pediatrics.


Thomas the Tank Engine is a long running show very popular with kids. It has some famous catch phrases like Thomas saying he wants to be a ‘really useful engine’ and his fellow engines Annie and Claribel yelling ‘We are so full, we are so full’. According to reports Max’s mother allowed him to watch as much TV as he wanted and he also saw popular shows of the Disney channel. The child is now being treated by a specialist in California.

Some experts however believe that his case is not unique and alarmingly there are many children who get an overdose of television at a young age resulting in learning difficulties later in life.  The problem has become so grave that doctors say children under the age of two should be totally banned from watching television.

According to British researchers, television hinders communication skills in kids, ability to concentrate and leads to obesity because of the lesser time they spend on physical activities.

Stuart Biddle the chairman of the ‘sedentary behaviour and obesity’ working party, which is currently considering guidelines for the Department of Health says, “We are considering what guidelines should say, and a statement around no television for the under-twos is potentially one of the more controversial ones.’

Guidelines are also being set to restrict TV viewing for 2 to 5 year olds to one hour a day.

Some countries like Australia have already drawn up guidelines that regulate TV viewing for kids with ban on TV for children under two. Similarly France, too, has banned any programmes that are made for kids under the age of five.

The incident will hopefully alert more parents about the drastic effects of too much TV and help them think of other ways of entertainment for the tots that helps with their overall development too. – Atula, Staff Writer