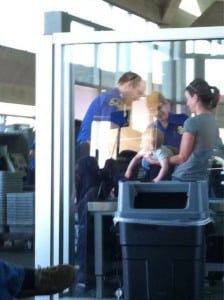 The Transportation Security Administration has sparked controversy after photos of 2 agents patting down an 8-month-old baby at Kansas City International Airport were posted on twitter.

Jacob Jester was waiting to board a flight to Albuquerque on Saturday when he noticed TSA agents ‘patting a baby down from top to bottom’.

The Metro pastor took a picture of the scene and uploaded the picture to Twitter, where it received a huge response, saying

It was so popular that the tweet has had over 140,000 views since he posted it.

“I understand that my security is at stake. I appreciate TSA trying to make flying more secure. But I wouldn’t want it to happen to my son,” Mr. Jester told Elliot.org.

“TSA has reviewed the screening of this family and determined that the officers involved followed proper current screening procedures. After the child’s stroller alarmed during explosives screening, officers followed protocol to conduct additional screening on members of the family, who were very cooperative.”

“While children are not exempt from security screening, Administrator [John] Pistole has tasked the agency with exploring additional ways to focus its resources and move beyond a one-size fits all system while maintaining a high level of security. As part of this effort, TSA has been actively reviewing its screening policies and procedures to streamline and improve the screening experience for low-risk populations, such as younger passengers.”

During a recent trip to the Caribbean I was surprised when security at Toronto’s Pearson airport swabbed both of my son’s(2 &5) hands. We live in a world now where airport security can’t trust anyone. While it was odd to have my young sons checked for hazardous residue, it felt good knowing they are checking everyone thoroughly.  Bad people are very creative so now in order to keep us safe – security has to do more.