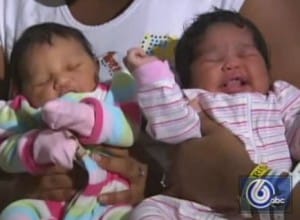 They say that twins have a special bond and that was certainly true this week when identical twin sisters Charron and Chardee Hampton welcomed baby girls – 2 hours apart!

Charron was admitted to St. Vincent Women’s Hospital to be induced earlier this week when she was joined by her sister Chardee a short time later after she went into labor.

“Two hours after my sister was induced, I started feeling it real bad,” Chardee Hampton said.

Laboring across the hall from one another, the girl’s mom was forced to run back and forth to give updates to the other.

“My mom had the camera, and she’s trying to run and show Chardee as she’s about to push. So, it was crazy. My mom was so excited,” said Charron Hampton.

The excitement, however, doesn’t end there. When the babies, both girls, arrived they were both 21 inches long, and both were born in a position not common for deliveries.

“Around 5 percent of babies are born face up, and it just so happens that both of us had babies that were face up,” said Charron Hampton.

Charron named her daughter Chanise Amari Monroe. Chardee named her daughter Trinity Dominick Brown. The new moms say that their daughters will spend their first birthday together, and they’re already planning to throw them a special party. 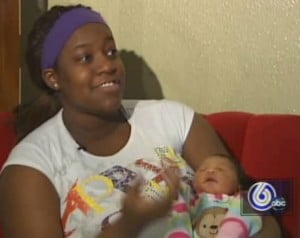 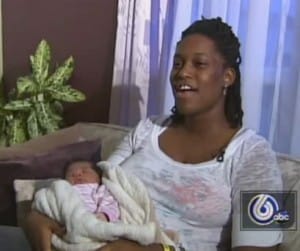 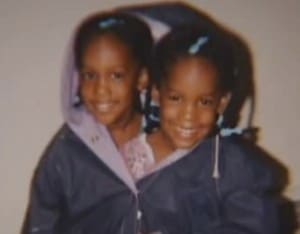 The pair, who have been close throughout their whole lives hope that their girls will share that same bond.

“We find ourselves always around each other, it just so happens,” Charron Hampton said.

“We definitely finish each others’ sentences sometimes,” said Chardee Hampton.

A wedding is the future for both Chardee and Charron and they haven’t ruled out sharing that special day as well!

“I think hers will happen before mine,” said Chardee Hampton.