The connection between twins can be uncanny. In fact, we’ve witnessed it time and again, twin sisters getting pregnant and giving birth right around the same time. Recently, Jessica and Joyce joined the ranks after giving birth within just three hours of each other in the very same delivery room. 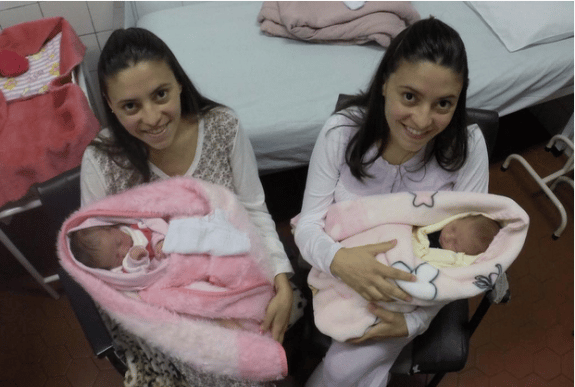 The 23-year-old identical twin sisters had learned they were pregnant right around the same time, with Joyce being just two weeks ahead of her sister. Sunday morning, they both started experiencing pain. They messaged each other throughout the day, and by the time night came around, the pain for both had increased. The whole family headed off to the hospital. 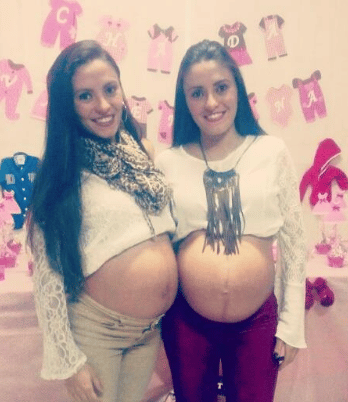 We all [came] together,” Joyce’s husband, Jorge Jose Bezerra Junior, told the Santa Catarina news. “We did not think they [would be] born together. [It] was an unprecedented event.”

When the girls arrived at the hospital, both were placed in the same room. At first, Jessica was going through the worst of the pain. In fact, doctors almost sent Joyce home. But rather than leave, she stayed to provide support for her sister. Not long after that, Joyce gave birth to bay Emanuelle. Jessica delivered baby Valentina shortly after.

Both babies were born right around the same weight, and one of the grandfathers even stated that, besides their mouths, the two newborns look almost exactly alike. So much so that, apparently, each time someone new sees the two cousins, they think they are actually twins.

“Every time someone comes in the room wondering who had the twin baby,” Joyce told the Santa Catarina news.

Both babies were born without complication, are reportedly doing well, and will be breastfed. They should be able to return home on Tuesday, and though they live in different cities, they say they live close enough to hopefully ensure the cousins stay close.

“I hope they [are always] like me and Joyce: always together,” Jessica said.