Tonight on the news there was a story about a set of twins that were born 2 months apart. The first baby was delivered because of an infection in the womb. The second baby was kept inside by a process called delayed interval delivery. 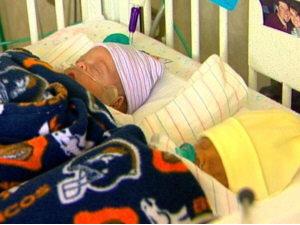 Adam, the first baby to be delivered arrived at 25 weeks gestation weighing 1lb 9 ozs. When Jayson, the second baby, was delivered 9 weeks later he weighed 4 1/2 lbs. At that point only ounces separated the two brothers. Jayson remained in the hospital for a couple weeks and now Adam has joined him at home.

When I first saw the story I though it was amazing and unique. While searching the net to get more info I realized that it was more common that I thought. Last year a Romanian mother, who has a rare congenital condition that gave her two uteruses, gave birth to twins separated by 2 months as well.

The good part is that you don’t have to share a birthday with someone else. These babies will all get to have their own special day to celebrate their exciting entrance into the world.