More information is now available about the set of Quintuplets that were born at Anne Arundel Medical Center in Annapolis.

The babies, who arrived at 30 1/2 weeks, were born to Adwai Malual, a Native of Sudan. 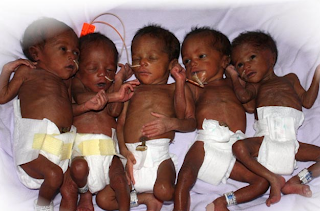 “They’re all what we call feeders and growers, warm in their incubators,” said Dr. Suzanne Rindfleisch. “They couldn’t be doing any better.”

The little boy is named Deng, and he arrived weighed 2 pounds, 5 ounces.

The new mom, who came to the U.S. to visit her sister, sought medical attention and was ultimately referred to Dr. William Sweeney, the medical center’s maternal-fetal medicine specialist.

She has been released from the hospital and is currently staying with family while the babies grow.She will be able to take them home in two to four weeks, hospital officials said.