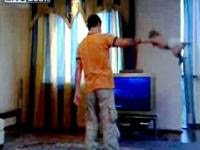 Last month we posted the video of a dad swinging his baby around like a rag doll. At that time, I thought that the video was so appalling that I could only get through the first 30 seconds.

The man, who says he’s from Australia, wrote he found the video of a father swinging around a 9-month-old baby somewhere online and he posted it on www.liveleak.com in October. We found it a youtube.

He claims Live Leak representatives reported the video to local authorities in London in an effort to track down the man seen swinging the baby.

His IP address was tracked to an Australian address, which prompted Australian federal police to raid his home and office, and seize his computers before arresting and charging him with accessing, downloading and uploading child abuse material with the intent to distribute.

He also issued a warning to uploaders and video Web site moderators to “be very careful of what they post when it comes to children.” (UGHH!!!)

Disclaimer: We found this story at MSN and they claim that there have been no reports authorities have tracked down the man seen swinging the baby so it is hard to say if this is true…

I hope it is because this sick man needs to punished for his horrible treatment of this baby!