Mom-to-be Vanessa Lachey was photographed on Thursday(May 3rd) picking up a smoothie at Coral Tree Cafe in LA. 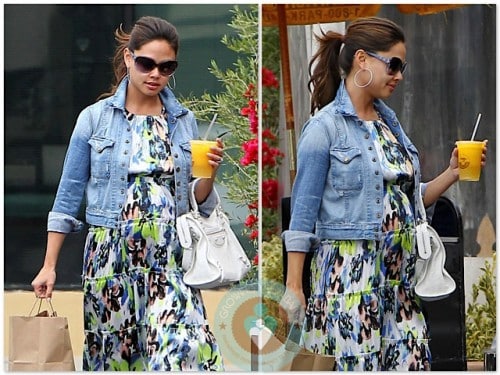 The actress was cute in a floral maxi dress and a jean jacket. Pregnant with her first child Vanessa has been very open about her excitement about becoming a mom. During a recent interview with Parade.com she spoke about her cravings, nesting and Nick contribution to the baby’s development.

“I think it’s important to let yourself indulge but what I eat, what I put into my body, goes directly to my baby. It makes you think, “Do I really want to get that Snickers bar snack or do I want to get a bowl of fruit?” So then I go for the fruit and the antioxidants. But of course I’m human and after we went out to dinner last night, I had a bowl of ice cream. After the baby is born, I still want to have me. I don’t want to start at ground zero to try and get back to that.”

“Some of the books are inconsistent on when the baby can hear me and outside voices. I told him the other day that the baby could hear him now and he corrected me! He was like, ‘no, actually according to my book…” When that time does come, I know he’s going to sing to the baby every single day. It’s sweet to see that smile on his face.”

“I have [been nesting] in my mind but I’ve been a little consumed with work. But the interesting thing I’ve noticed is my husband is nesting. I always thought it was the woman but he’s doing his little nesting part too. He saw this old table we have and he sanded it, then he stained it, put glass on it. He made us a desk! It was pretty incredible. Now I feel guilty so I think because of that I tried to put the stroller together the other day. But we have a good amount of time to prepare.”

Vanessa has been busy working on a Tide campaign and filming Wipeout. Once those commitments are complete she will be taking the last three months off to focus on the baby.

“Take off work, completely nest, fold all of the clothes and do the laundry. Just get everything ready.”