Home » Victor and Digna Carpio Introduce Us To Their Sextuplets

The four boys and two girls arrived at 25 weeks, which is three months early, and weighing in at about a pound and a half each.

At first their delivery was kept a secret while doctors worked feverishly to make sure the infants all lived. 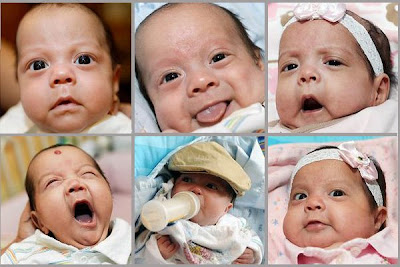 Now 5 months later, all six babies are home and keeping the family on their toes.

“They’re all doing just fine,” their beaming father Victor Carpio said as he sat on his living room couch, cradling Jaden in his arms and feeding him with a bottle.

Six empty bassinets lined up in two neat rows took up all the floor space in front of him. In a corner of the cluttered room was a 4-foot high stack of boxes filled with baby formula.

“That’s enough supply for just three of them,” Digna says, pointing to the stack of formula boxes.

She seemed tired and overwhelmed and fought back several yawns in the first interview she and her husband have given since the babies came home.

“It’s not easy to find time for sleeping,” she said.

Luckily, the city’s Administration for Children’s Services has stepped in to supply the family with two home health care aides. But that service is only available during daytime and is only expected to last for the first six months.

Every day after 6 p.m., mom, dad and their only other child, 7-year-old Jhancarlos, are on their own.

As you can imagine, feeding all six babies is a challenge for the couple. Victor and Digna always get up in tandem each night for feedings and put the babies in a line on pillows with their bottles propped with towels.

“Burping them is the biggest problem,” the busy dad says.

The Carpios say the nurses at Mount Sinai Medical Center, where the babies were born, did a terrific job training the infants to a feeding routine.

“They all wake up at the same time every four hours, and once we feed them they usually go right back to sleep,” Digna Carpio said.

Even simple things such as traveling have become a challenge, since the only car they own, a Toyota 4Runner, is too small.

“Whenever I leave the house with the babies I have to pack a suitcase like I’m going out of town,” Digna Carpio said. “This month alone, I have four hospital appointments for them. If we all go, that means six babies, me, and the two home care aides, and that means two cars.”

For now, the three cribs — with two babies assigned to each — are all neatly arranged in one of the three bedrooms of the small brick home the couple bought in Whitestone two years ago.

Many families who have had sextuplets have been given help from outside organizations. This family didn’t run a ‘help us’ campaign even though that is exactly what they need.