Victoria Beckham was photographed on Saturday holding her daughter Harper as the pair arrived at LAX airport on a flight from London. 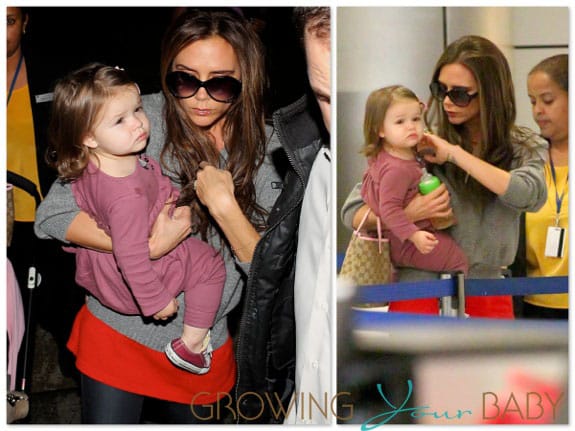 Not wanting to miss her husband’s last game with LA Galaxy, the ladies landed in time to watch David & his team win the MLS Cup for a second time.

For the last week, Victoria and her 3 youngest kids have been in London, where she is reportedly house hunting and looking at schools for the boys.

‘David and Victoria love America, they love what it has given them, but the boys loved being back in England and now could be the time to make a return.

‘They have been looking at houses over the past few months and the future is exciting as anything could happen. The thing they are most concerned about is giving the children stability. What is nice about being back in the UK is that they would be close to both their families again.

‘It’s early days, but these are plans that are being mooted. Victoria and David would love the children to spend their formative years in school back in Europe.’

Harper was cute in a fushia dress and matching Converse sneakers.  As they made their way through security Victoria carried the toddler’s bottle and a sweet pink Gucci tote from their ‘Zoo’ collection.