For parents of children with disabilities, there is often a grieving period. You struggle to accept the true depths of your child’s limitations. You mourn the life that you imagined they’d one day have. But eventually, you come to acceptance. You love your child for who they are and not who you thought they would one day be. You realize that, despite the limitations, you are blessed to have that child in your life.

But acceptance doesn’t mean that you or your child can’t search for the best possible quality of life. Debby Elnatan, a music therapist from Israel, understood this and actively pursued that very best quality of life for her son, Rotem. Even better, her invention – a walking device for children with conditions like cerebral palsy – has the potential to bring that very same quality of life to many families worldwide.

“When my son was two-years-old, I was told by medical professionals that ‘he didn’t know what his legs are and has no consciousness of them,’” Debby told Daily Mail UK. “That was an incredibly difficult thing for a mother to hear. I started to walk him, day after day, which was a very strenuous task for both of us. Out of my pain and desperation came the idea for the Upsee and I’m delighted to see it come to fruition.”

The Upsee, a harness device that attaches to the parent and holds the child upright, allows infants and small children to stand and achieve repetitive walking training with less physical strain on both child and adult. 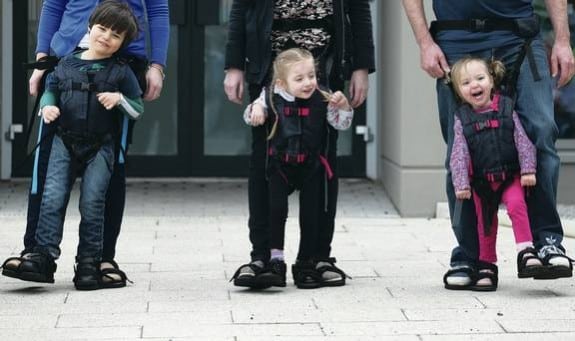 The specially engineered sandals help child and parent step simultaneously, and even give the child the ability to do simple foot tasks, such as kicking a ball. The device is hands-free, which enables fully engaged care and play (parent holding a ball or other toy), as well as the ability to complete safe daily tasks (sorting mail, answering the phone, opening doors) during walking sessions.

After creating her device, Debby searched for a company that could mass produce it. When she came across the Ireland-based manufacturer, Leckey, which has a long track record of producing high quality products for children with special needs, Debby knew she’d found the right company.

As it turns out, she couldn’t have been more right; Leckey saw massive potential in the Upsee and jumped on board. They tested the product in the UK, US and Canada. After families reported massive success, the company decided to release the Firefly Upsee globally. And Debby couldn’t be happier.

“It is wonderful to see this product available to families across the world,” Debby said at the official unveiling of the Upsee in Lisburn.

“Short-term, the Upsee improves special needs family participation and quality of life, while research suggests it has the potential to help with physical and emotional development in the longer term,” Firefly’s clinical research manager and occupational therapist, Clare Canale, told Daily Mail UK. “It has been humbling to see the progress and happiness the Upsee is creating; watching children do simple things for the first time such as kicking a ball of playing with a sibling for everyone involved, but especially for the families.

Maura McCrystal, mother of five-year-old Jack, from Draperstown in Northern Ireland, was one of the first parents in the UK to try out the Upsee. It has changed her family’s life for the better.

“Last Sunday was a significant one for us as a family as it was the first time our son, Jack, was able to play football in the back garden with his dad, his brothers and our little dog, Milly,” Maura told Daily Mail UK. “To see Jack playing like any other five-year-old boy made me very emotional. Jack and his brothers so enjoyed it.”