Home » Who is the Seven Billionth Baby and How Does It Affect Us?

Countries from all over the world have tried to stake claim to the seven billionth baby – twin boys in Africa that have yet to be named, baby Nargis born in India, a baby born in Russia – just to name a few. Lavish celebrations were held for each one of the babies that may or may not be the seven billionth, but one received recognition as being the seven billionth by the United Nations – little Danica May Camacho, who was born in the Philippines. 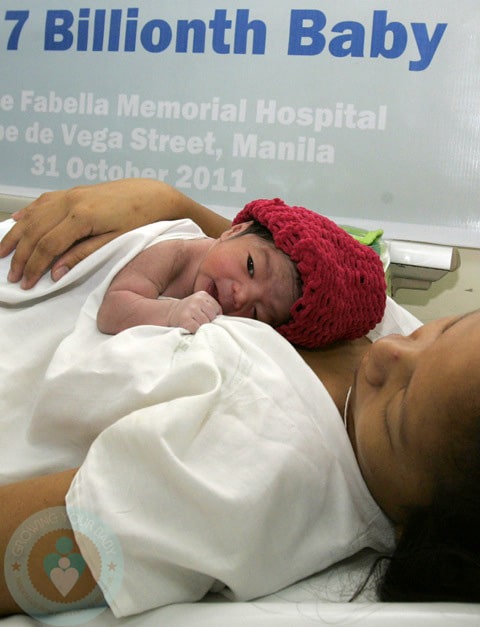 “She looks so lovely,” Camille Galura, Danica’s mother whispered as she cradled her “morning star.” She is the family’s second child. Danica and her family received a chocolate cake, a scholarship grant for her and money to open up a shop to commemorate her milestone birth.

Some officials say that the planet will not actually reach seven billion living people until sometime next year, but the UN decided that yesterday would be the day to mark the global milestone. Whether we are at the official seven billion marker or whether it is fast approaching, we must question – what does seven billion people mean for human life and planet Earth?

Dr. Eric Tayag of the Phillippines’ Department of Health says that the seven billionth birth is more about the future than a celebration of today’s births.

“Seven billion is a number we should think about deeply.” Tayag stated. “We should really focus on the question of whether there will be food, clean water, shelter, education and a decent life for every child. If the answer is ‘no,’ it would be better for people to look at easing this population explosion.”

Tayag and I would probably find some common ground if we were to sit and talk over coffee. I recognize that seven billion people is a lot of people. I recognize that, with the way we live our lives, seven billion people is putting a really big strain on our planet. Even more painstaking is that it doesn’t look like the population growth is going to slow down anytime soon.

China has slowed their population growth so well that the Philippines are expected to surpass China’s population by 2025, according to the U.S. Census Bureau. I remember hearing about the population control in China as a young teen and thinking how wrong it was. Today, I wouldn’t agree with my former self. Am I saying that the government should outline how many children the average family should be allowed? Not necessarily, but maybe.

You see, I see things just slightly differently than Tayag. Don’t get me wrong. There is a definite need for us to be a little more mindful before we bring more children into the world. But I also believe that there is an even bigger need to look beyond population control. Lifestyle has a lot to do with how the population impacts the planet as well – so much so, in fact, that seven billion, while a lot, might not be such a depressing number.

Alternative lifestyles are growing in popularity, but they are not the norm. Vegetarian, vegan, eco-friendly, permaculture…the list goes on. And while every person that follows an alternative lifestyle knows that one can make a difference, we also recognize that more need to make the change for there to be a real impact.

I know that there are things that can be done to reduce greenhouse gasses, solve the oil wars, solve world hunger, provide clean drinking water to everyone, clean our fresh water source, clean the oceans, restore plant and animal life that is going further and further into extinction every day, provide education for children in all parts of the world, stop homelessness, you name it – there is a solution. Want to know how I know?

There is a person or group of people that can help make that change happen, come up with a solution. The problem isn’t finding a solution – it’s getting everyone to listen and participate; getting every person on the planet to think about how we are all connected, from Canada to China, from Japan to California, from grass to person, from our living, breathing planet – the only Earth we have, the source for human life – to every person on the planet, from one to seven billion.

Ghandi said it best, “Be the change you wish to see in the world.”