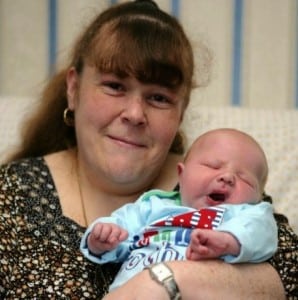 Being already a mother of two, it would seem that a woman would know when she is pregnant, but Lesley Nicholl had no idea she was expecting her third child until she went to hospital complaining of severe stomach ache.

When the 35 year old mom went to the Homerton Hospital, in east London complaining of stomach ache, their scans revealed she was actually carrying a child – who was overdue. After an emergency C-section little Nathan was born weighing 9 pounds and 2 oz.

‘I had scans, tests, I was still in major pain. Eventually they discovered there was this baby inside me, right up against my rib cage.’ said Lesley.

Nathan, though healthy was dry and wrinkly when he came out of the womb, that doctors say was an obvious sign that he was overdue.

Lesley is thankful that despite her being unaware of his presence, her son was born healthy. She also feels lucky that although she continued to work as a nursery manager, and took two courses of antibiotics before Christmas, the baby was not affected in any way.

“Even the hospital is saying he’s a miracle baby because he’s come out perfect,” said the mother.

She stressed that she was unaware of the pregnancy because she did not get any unusual cravings or morning sickness. She did think she had gained weight but it was not odd for someone who was already on the heavier side.

”I thought I’d put on a teeny bit of weight but I’m big anyway – I couldn’t pass as a model.’

For the hospital staff, too, the incident was unusual.

Head of midwifery at Homerton Hospital, Joan Douglas, said: ‘I’ve been a midwife for 22 years and I’ve never known a woman not to know she’s not pregnant. It’s very very rare.’

The family is overjoyed though with the surprise addition.

Lesley’s mother Susan Nicholl and partner Trevor Tull, 34, a nurse at Whitechapel’s Royal London Hospital were shocked initially but are happy to have a new addition to the family.

‘Nathan’s a true little miracle. He’s come into the world for a good reason and he’s going to be special to us all,’ she said.