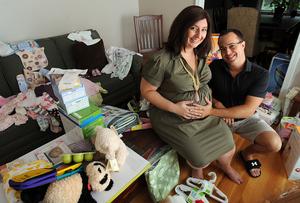 When Rebecca and Larry Byrne found that they were expecting a baby after a successful in-vitro fertilization attempt the couple was overjoyed. Their happiness soon became overshadowed when a lump found in Rebecca’s breast turned out to be cancer.

Rebecca Byrne was 13 weeks pregnant when she was diagnosed with cancer. At the time, the couple was advised to abort the pregnancy so that she could undergo treatment to save her life. The couple instead choose to seek less invasice treatment that would hopefully keep her, and the baby, alive.

Rebecca sought a second opinion with Dr. Ann Partridge of the Dana-Farber Cancer Institute in Boston. She was able to receive smaller doses of chemotherapy, planning to move into more aggressive treatment including radiation and stronger drugs after the baby is born. She also has undergone frequent ultrasounds and care from a high-risk obstetrician to make sure that the developing child is enduring the treatments well.

Her doctors plan to induce her labor the second week of August, at only 35 weeks along, in order to begin her more aggressive treatments as soon as possible. Despite the hardships that cancer is bringing her, Rebecca is excited to be mother.

“It’s been tough,” said Byrne’s husband of seven years, Larry. The two met when they were both students at Worcester Polytechnic Institute. “I mean she’s had many days of crying, but she’s doing really good.”

Rebecca has used this experience to become an advocate for cancer awareness and breast self-exams. August 7, one week before she is due to be induced, Rebecca and her sister are planning a cancer benefit walk called the “Run, Walk or Crawl 5K – We will NOT lay down 2 cancer.” They will be joining a friend who recently lost a pregnancy due to a tumor inside her uterus.

According to Dr. Partridge, 1 in 3,000 women are diagnosed with breast cancer during pregnancy. – Summer, staff writer