Over the past decade, water births have increased in popularity.  Giving birth in the water is believed to reduce the pain and speed up the labour.  But one mom is taking the water experience to the next level by planning an ocean birth, which will be ‘assisted’ by dolphins.

Dorina Rosin and her husband Maika Suneagle live on the big island of Hawaii, where they run a spiritual healing center.

The mom-to-be recently took part in a dolphin blessing ceremony where she swam with her 38-week pregnant belly visible in the water alongside dolphins. This ceremony is the pre-cursor to her daughter’s birth, which will also take place in the ocean. 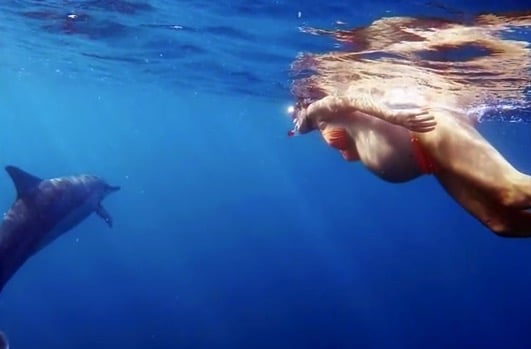 According to the Daily Mail, Dorina’s birth plan is to just show up in the ocean while in labor and hope some dolphins appear to ‘assist’ with the delivery.

The couple says they believe their baby will be able to speak “dolphin.” 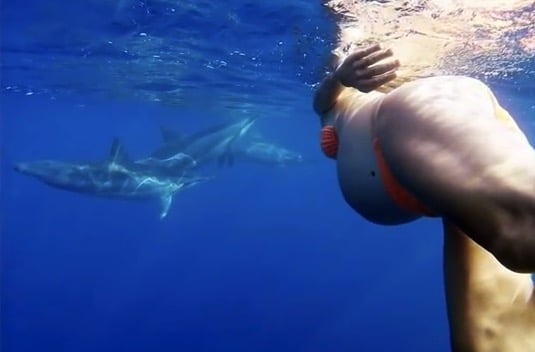 The big catch with the plan, however, is that sharks may be attracted to the area by the blood and discharge.

Plus, if birth complications arise, pulling Dorina out of the ocean and getting her to a hospital could cost the mom and baby their lives.

Dolphins are often seen as incredible, spiritual creatures, but they can be dangerous and unpredictable.

In 2013 science journalist Christie Wilcox wrote about having dolphins present during delivery for Discover.

‘This has to be, hands down, one of the worst natural birthing ideas anyone has ever had.

She cites research showing that dolphins will ‘toss, beat, and kill small porpoises or baby sharks for no apparent reason other than they enjoy it, though some have suggested the poor porpoises serve as practice for killing the infants of rival males.’

‘Is this an animal you want to have at your side when you’re completely vulnerable?’ she asked.

In 2009 a couple filmed their ocean dolphin, childbirth, which makes the whole experience look magical. This type of video can definitely be misleading to parents looking for a more ‘spiritual’ way of welcoming their child into the world.