Lorraine Wilson had a pretty normal pregnancy and her labor lasted only 15 minutes. But shortly after her second child, Evan, was born, the midwife noticed something was terribly wrong. Evan had an abnormality in his stomach. Within just mere moments after being born, doctors whisked him away for further analysis. Doctors would return with a heartbreaking diagnosis: hepatoblastoma, cancer of the liver. 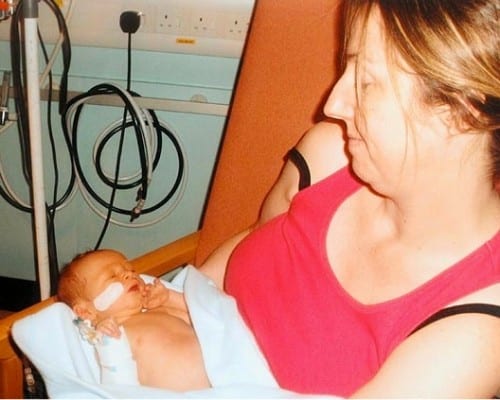 “I only held Evan for a few minutes when they took him off me and all this began,” recalled Evan’s mother, Lorraine. “I was howling, I was completely irrational, I didn’t know what to do. It sounds strange, but when they told us it was just liver cancer, we jumped for joy because that meant it hadn’t spread.”

But it was still cancer, and doctors were unsure of how to treat a baby so young. Only a handful of babies have developed cancer while still in the womb.

“It was horrendous to go through as a mother,” Lorraine stated. “None of the doctors knew what does of chemo to give him because they had never had to treat anyone so young. We honestly thought he was going to die. I thought the doctors were going to tell us to enjoy Evan while we still had him. But when they came back and said they could help, I was overjoyed.”

The first step would be reducing the size of the tumor through chemotherapy. Treatments started when Evan was just 12 days old. Doctors would then remove his gall bladder and half of his cancer-ravaged liver. Six more chemotherapy treatments would follow.

During his treatments, Evan’s mother and father underwent genetic testing to determine if there might be a reason for his rare condition. But the testing was only able to come up with a “tentative link.”

“We were seen by geneticists a few weeks after Evan’s diagnosis, and they basically said it was probably just very bad luck,” said Evan’s father, Scott. “But they did say there might have been a tentative link between the cancer and a condition called familial polyposis I had when I was 22.”

But it seems that little Evan’s run of bad luck may be over. Right now, the family is anxiously waiting to find out if Evan will receive an all-clear. The results from his MRI scan will take two weeks to get back. For now, Evan’s visual appearance and fighting spirit give them a bit of hope.

“Apart from a central gastric feeding tube, he looks like a normal, healthy boy,” said Lorraine. “I can’t praise the doctors enough. It is their skill and dedication that saved him, especially with him being the youngest cancer patient in Britain.”

It just doesn’t seem fair when little babies are forced to be so strong. We hope that this little brave little guy receives the all-clear.