Home » Zoo Staff Save Life of Pregnant Woman After She Collapses 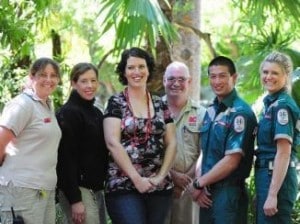 Alice Every cannot imagine what would have happened to her and her unborn baby if she was not at the Adelaide Zoo on March 7th. The zoo staff kept her alive when she collapsed after her heart stopped that fatal day.

Alice does not remember visiting the zoo that day. She was with her mother Meg Tucker and two year old daughter Matilda when she collapsed in the ladies washroom at the zoo. Her mother rushed to the cubicle hearing a strange noise and alerted the zoo staff.

Maintenance worker Stephen Hall was the first to arrive on the scene. He called others and soon bird keeper Kate Barclay and animal health department manager Di Hakof arrived with a first aid kit.

Kate lifted herself to the cubicle in order to lift Alice and open the door. She then cleared her airway while Hakof began CPR and Hall called for an ambulance.

A backup ambulance crew had arrived by that time. They transferred Alice to a stretcher and rushed to the Royal Adelaide Hospital.

Recounting the scene Chien says it was one of the best displays of CPR he had seen.

“I could see Di was doing good CPR and that just kept her heart going,’’ Chien said.“If she wasn’t doing CPR there’s no telling what could happen. Having people trained in senior first aid every bit helps. Any treatment is better than no treatment.’

Alice spent two days at the ICU of RAH before being transferred to Flinders. Here, she spent two days in the ICU, then at the coronary care ward and was released on March 16th.  Doctors were uncertain as to the cause of her cardiac arrest and will wait till the baby is born to run more tests. They are also not sure if the baby has been affected in any way due to the problem.

Alice now has had a defibrillator and pacemaker fitted and has been referred to a high-risk obstetric clinic.

“It’s weird for me because I don’t remember it all,’’ she says thinking back on the incident. “It’s taken me quite a while to grasp how serious it was.”

Recently the Everys went back to the zoo to thank the staff and also the paramedics.

“Thank you just isn’t enough,’’ Alice said. “They not only saved my life but saved the life of my baby as well. I am just really, really, really grateful. Grateful that I was here on that day and grateful they were here to take care of me.”

For the zoo staff too the incident seems to have made a definite impression in their minds.

Hakof says, “I think the fact at one point (Mrs Every’s) colour changed it went from blue to a better colour and I said … I think we can save her.”

The zoo offers senior first aid training to its entire staff and after the incident the number of employees willing to get the training has increased.