It’s not every day that someone can say they saved a baby’s life, but young Jayden Fontenot is saying it now. Of course, he didn’t save just one life; he also saved his mother! 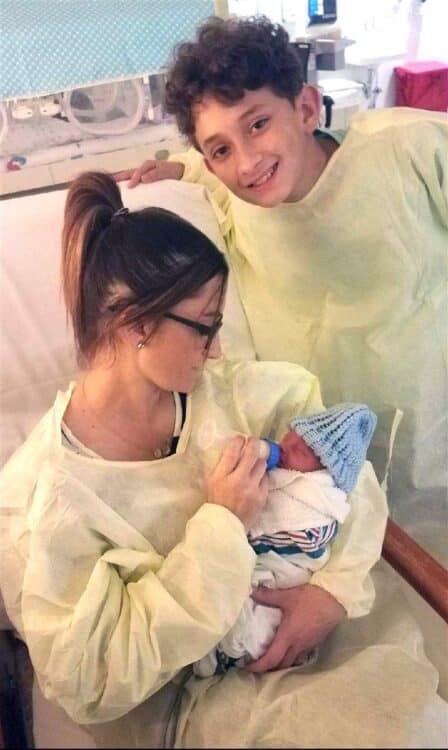 It all started when 36-year-old Ashly Moreau got up to use the restroom on August 11th. She still had more than a month to go before her due date, but her water broke right. Even more concerning was that, immediately after, Ashly noticed her baby boy’s feet sticking out of her.

The baby was breech.

Her fiancé, Kelsey Richard, had already left for work. The only other person home was 10-year-old Jayden. Initially, he was sent next door to get his grandmother, Francis Soileau, but she’d just had back surgery and couldn’t walk. She sent him back over and called 911.

“I said [to Jayden], ‘You’re going to have to deliver your baby brother, and we have to do it fast because the baby’s feet are turning blue and he can’t breathe,” Ashly told TODAY in an interview. “He said, ‘Tell me what to do and I’ll do it.’”

But the baby wasn’t the only one in distress. Ashly was bleeding profusely, possibly because the placenta had detached itself from her uterine wall, which may have either caused or been a direct result of the premature birth. Yet, through it all, Jayden managed to stay calm.

“I was crying, but I just tried to stay calm and collected,” Ashly said. “Jayden was so calm that it made me more calm. I could see he was scared, but he knew he had to do it.”

Instructed by his mother, Jayden gently rotated his baby brother so he could be fully delivered. Just as Ashly had suspected, the baby (Daxx) wasn’t breathing. Jayden rushed into the kitchen to grab the nasal aspirator the family used on Jayden’s 11-month-old sister, Remi. He and Ashly started pumping air into Daxx’s nose and, miraculously, he started breathing!

Now, both mother and baby are doing well, and Jayden has bragging rights. Better than that, he has a wonderful story to tell his baby brother one day, and he’s going to be recognized as a hero by the local mayor and emergency responders.

“I said to Jayden, ‘You’ll always have a special bond with your brother,’” Ashly said. “I’m just so proud of him. He saved our lives.”