The bottle is a baby’s best friend, offering both nourishment and comfort. But, using a bottle for too long can lead to problems like tooth decay, obesity, picky eating habits, and even mouth deformities. Pediatricians recommend introducing a sippy cup around 6 to 9 months, and weaning off the bottle by 12 months. Kicking the bottle habit may sound like a scary prospect, but it can be done without tears (from you or baby) with the help of these 5 proven methods. 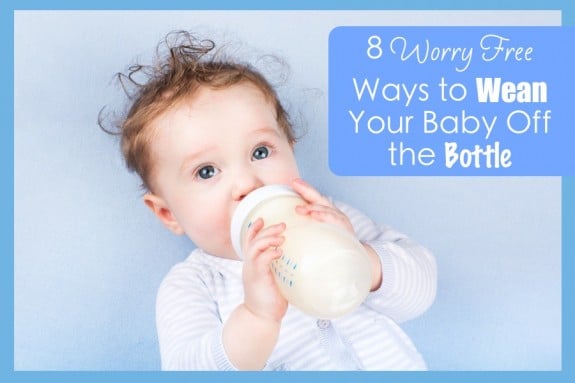 Babies begin to naturally drink less milk as they eat more solid foods. This conveniently sets the stage for phasing out bottles by only offering them in between meals as snacks. During meal time, offer a sippy cup of formula or breast milk. As your baby grows and eats more solids, offer less milk in the bottle until it is phased out completely.

Swap out the bottle for a sippy cup for one feeding a day for a week. The next week, replace a bottle with a cup for two feedings. Continue the process until there are no more bottles. It’s easiest to give up the mid-day bottle first, followed by the morning bottle, and finally the nighttime bottle.

If your baby is resistant to drinking milk from sippy cups, try putting only water in bottles and milk in cups. Explain that milk comes in a cup now and water comes in a bottle. Ask which one she wants. Giving a choice helps baby feel more in control and more likely to comply. Once she’s happy to drink from the cup, use it for all beverages and ditch the bottles.

Some children don’t like the standard sippy cup. If this is the case, try using an open rimmed cup with a straw. If the cup itself makes your child balk, start out by removing the nipple from a bottle and adding a straw instead. Then, transition to a cup with a straw. And this way, there is no weaning from the sippy cup later on. Bonus!

Offer your baby a cup with a little milk or formula at every meal, and end the meal with a bottle. Gradually increase the amount of milk in the cup while decreasing the amount in the bottle. Once your baby drinks about 4 ounces from a cup at each meal, drop the bottle. Serve any additional feedings in a cup so baby gets between 16 and 20 ounces a day.

Sometimes all it takes is a little incentive. Dilute the milk you serve in a bottle with water, and offer regular milk in a cup. Once she associates bottles with the watered down version of her favorite drink, they will suddenly become less enticing.

If the gradual approach seems too agonizing, or if your child is strongly attached to the bottle, quitting cold turkey is the answer. Give fair warning before getting rid of the bottles though. Use lots of positive reinforcement, telling your child how he is a big boy now and big boys use cups. After a week with daily reminders that it is time to stop using bottles, physically remove them from the house.

Many parents find success when they wean off bottles at the same time they switch to whole cow’s milk around 12 months. This is similar to the cold turkey approach, since the bottles will simply disappear one day. However, this approach kills two birds with one stone, and is actually easier for some babies.