A passer-by mistakenly thought she had spotted abandoned puppies. But the woman and the group she was with took a closer look and realized that what they had stumbled across was even stranger: tiny twin girls with their umbilical cords still attached. 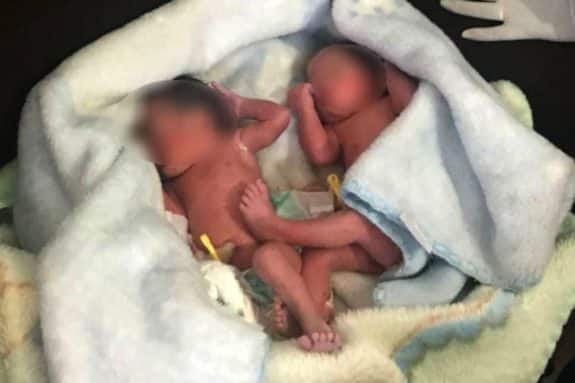 The incident happened in the city of Curitiba, in the southern Brazilian state of Parana.

Police and medical personnel were called to the scene, and the twins are now being cared for in a local hospital. Medics say that the babies were born at full term, but apparently abandoned on the street shortly after their birth.

A local police spokesperson, Guilherme Zasevski Almeida says that information local law enforcement has indicates that the babies were dropped off by someone who sped away in a white van.

Tamela Ribeiro is one of the women who found the tiny girls. She says that she “thought they were dogs until I looked right at them and realized it was two babies.”

Hospital staff currently caring for the infants has given them names. One baby is called Eloa, a name meaning “God.” Her sister has been named Helosia, which means “warrior woman.”

The twins are in good health and will remain hospitalized until they start gaining weight. One baby weighs 6 lbs. and her sister tips the scale at just under 4 lbs. When they reach a healthier weight they will be moved to a care facility and be available for adoption.