When a woman has a water birth it means at least part of their labor, delivery, or both happen in a pool filled with warm water.  This method of delivery could offer a variety of benefits including a reduction in pain, while possibly speeding up a mom’s labor. 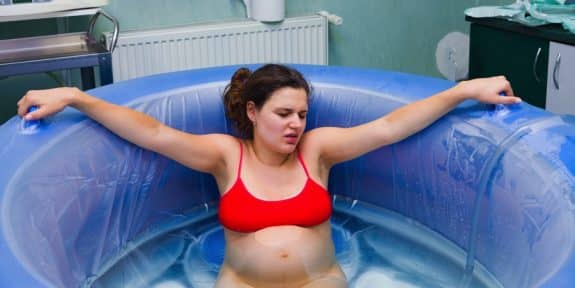 There are also some risks associated with delivering a baby in the water, which has led the American College of Obstetricians and Gynecologists (ACOG) to release a revised Committee Opinion on the subject.

“Immersion in water during the first stage of labor may offer some benefits: It may shorten labor and is associated with a decreased use of epidurals,” said Joseph R. Wax, chair of the ACOG Committee on Obstetric Practice that developed the Committee Opinion. “However, it is important to differentiate between laboring in water and delivering in water. There is no evidence to support delivering a baby in water has benefits to the baby.”

To protect the health and safety of the mother and the baby during labor, ACOG provides recommendations for hospitals or birth centers that plan to offer water immersion in the first stage of labor.

The ACOG stresses that the safety and efficacy of immersion in water during the second stage of labor (delivery) have not been established, nor has there been any benefit shown to women or newborns. Additionally, rare but serious health problems in the newborn have been reported. Potential risks of in water delivery include a higher risk of maternal and neonatal infections; difficulty in the regulation of the baby’s body temperature; increased chance of umbilical cord damage; respiratory distress resulting from the baby inhaling tub water; and potential for asphyxia and seizures. Until sufficient  evidence is available, it is the recommendation of ACOG that birth occur on land, not in water.