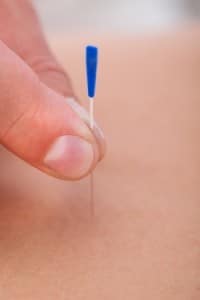 Despite recent meta-analysis findings that reported a 20% increase in IVF success rates when acupuncture is used, a more rigorous reanalysis found that acupuncture does not have any effect on the outcome of IVF treatments.

Prior to the 2012 meta-analysis of 24 studies that had reported a significantly higher pregnancy rate with acupuncture when compared with placebo or no acupuncture rates, studies since 1996 have reported varying results. It was the odd and significant rates that prompted Dr. David R. Meldrum and his colleagues to take a better look at the 2012 analysis.

The reanalysis excluded eight lesser-quality studies that were included in the original meta-analysis. Those excluded studies did not use the Streitberger mock acupuncture technique (a widely accepted control technique in acupuncture studies).

“Based on this, we think that, at the present time, acupuncture appears to have a placebo effect. There are not enough data to say whether it has a specific effect,” Dr. Meldrun, a reproductive endocrinology and infertility specialist in group practice in Redondo Beach, California said in the UCLA annual in vitro fertilization and embryo transfer update 2013.

A secondary analysis of the data, minus studies that used a widely accepted type of sham control, was also conducted by the authors of the meta-analysis. They had reasoned that the sham procedure would create pressure that could be therapeutic. And it had seemed to be true, according to their results, which found a significantly higher birth rate in those that had received the sham technique.

Dr. Meldrum and his colleagues were not convinced, however, and they used their epidemiologic training to conduct their own reanalysis of the meta-analysis, excluding at least 8 of the 24 studies in the original data set; they felt that those excluded “didn’t belong” in either analysis.

Three compared data from multiple arms in the trials rather than just acupuncture versus control. One of had not been randomized. Two others compared acupuncture to a combination of anesthesia drugs that “we know could have a negative effect,” Meldrum said. Another compared acupuncture to general anesthesia and one compared the control to acupuncture plus “special Chinese medical drug seeds” instead of acupuncture alone. Once those studies were excluded, the re-done meta-analysis of 16 studies showed a statistically non-significant odds ratio for pregnancy of 1.14 for acupuncture.

Data from just three studies that had reported birth rates and found an odds ratio for birth of 0.74 in the acupuncture groups versus controls was also reanalyzed by the team. In one of the studies, there was “recorded rotating, lifting, and thrusting [of] the needle,” which Dr. Meldrum said would likely be stressful to some patients. That reanalysis revealed a reduced chance of IVF success.

“I would think that if acupuncture had a specific effect, the placements of the needle would be consistent. They were widely variable in different studies. So, I am somewhat skeptical as to whether acupuncture, even with much larger experience, has a specific effect,” Dr. Meldrum said. “We’re not saying that patients should be dissuaded from having acupuncture, because it is widely used, but I think we have to be frank that it’s questionable whether there’s a specific benefit.”