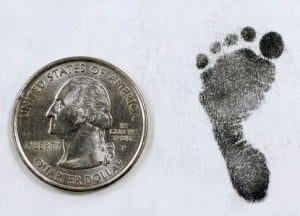 Little Addison was born three months early and weighed just 13.7 ounces. At her birth, doctors at the Corpus Christi Medical Center gave her a very slim chance of survival. Now, the little fighter is about to celebrate her first birthday- and she is a happy and healthy little girl.

Stacy Fischer did everything right during her pregnancy. A leader for Weight Watchers, Stacy ate a healthy diet and continued with moderate exercise. Twenty-five weeks into her pregnancy, many people did not even know she was pregnant. Unfortunately, Stacy felt a gush of blood in October, and feared the worst. “My heart just stopped,” she recalled. “I just knew that blood meant a miscarriage.”

After calling her doctor and her husband, Stacy drove herself to the Bay Area Hospital, where she found out she had a severe case of pre-eclampsia. The dangerous pregnancy condition is marked by excessive amounts of protein in the urine and dangerously high blood pressure. When her placenta began detaching, it was obvious to doctors that delivery, at just twenty-five weeks into the pregnancy, was inevitable.

An emergency Caesarean section brought tiny Addison, just the size of a soda can, into the world. Her footprint was smaller than an adult’s thumbprint, her skin paper thin and translucent, and she could easily fit into neonatologist Dr. Miguel DeLeon’s hand.

The effects of being born so early went deeper than appearance. Addison had a hole in her heart and her lungs were underdeveloped. Her sensitive skin was so thin even the monitors stuck to her tiny torso left burn marks.

When Stacy Fisher first laid eyes on her baby through the warmer that regulated Addison’s body temperature, she could scarcely believe Addison was alive outside of her womb. The wires and tubes dwarfed the tiny girl, and her mother said she resembled a fetus more than a baby. For a month straight, Stacy sat by her daughter’s incubator, wondering if she would survive. 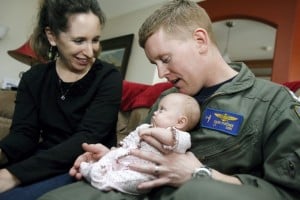 Despite all odds, Addison left the neonatal intensive care unit and went home with her mother and father just 93 days later. She weighed 4 pounds 4 ounces on the day of her discharge- half the weight of a full term baby.

Ten years ago, doctors would have considered a one-pound baby surviving a miracle. Babies born too soon often suffer long-term affects and need multiple surgeries to correct their health problems. Little Addison has only required one surgery on her eyes to correct the blood vessels bunched behind her eyes(ROP), and is now a healthy girl with just a few tiny scars remaining from her rocky first months.

While most 11-month-old infants are bigger than Addison’s 14 pounds, she is quite advanced for her adjusted age of 7 months. She crawls and babbles, and according to Dr. DeLeon, all signs indicate she will be a completely normal child.

We think so too, and we hope this tough little girl enjoys her very special first birthday on October 14th. – Jill, Staff Writer
Related Articles: