Home » New Study Reveals ‘Babies are Being Weaned on Junkfood’ 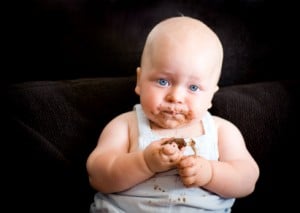 A disturbing new study conducted in Australia has found that many infants are being fed cookies, cake, and soda at as young as only four weeks. For too many infants, they are moving straight from formula to junk food without tasting fruits and vegetables.

While interviewing 600 mothers, it was revealed that by six months old 21 percent of infants are already being fed cookies and sweets. Slightly more, 23 percent, are drinking juice at that age as well. At nine months, those numbers increase to 78.5 percent. At this age more than half are already eating ice cream and french fries. By the time infants reach twelve months, nearly all have eaten cookies, cakes, and assorted junk foods.

The numbers are considered shocking to the experts, who say that these types of food should not be given to infants. A study from 2007 found that 20 percent of toddlers are overweight, in part, it is thought, to be because of these types of poor feeding habits.

“We are not giving kids the chance to develop healthy eating patterns if they are being introduced to these foods in infancy,” Associate Professor Scott said.

“These are treat foods — the idea that people would see them as weaning foods is disturbing.”

Many experts agree that infants should be fed fruits and vegetables as they move from a liquid diet to a solid food one. Introducing healthy foods early on is important to creating healthy eating habits in children.

“If they don’t have these fruits and vegetables in the first 12 months, and they have never tasted them, they are less likely to accept them later,” dietitian Melanie Kelly said.