Autism is now diagnosed in about 1 in 68 children, according to the Centers for Disease Control and Prevention (CDC). The effects are far-reaching and can hinder everything from social relationships to future self-sufficiency. But after a new study, conducted by the Columbia University Medical Center, it appears that there may be a way to dampen the effects by pruning extra synapses found in the brain of children and adolescents with autism. 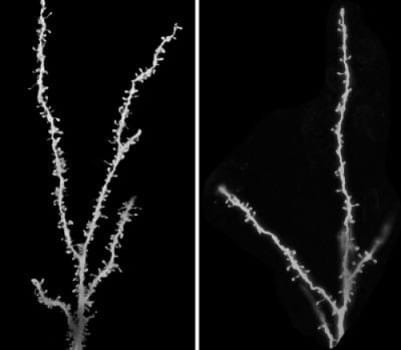 During normal brain development, a large burst of synapses are formed during infancy. These are primarily found in the cortex of the brain – a region of the brain that has been linked to autistic behaviors. Over time, these are usually “pruned,” but researchers speculated that this process is slowed in children diagnosed with autism. Additional synopsis could explain why some of the behaviors in children with autism occur.

To measure the synapse density in a small section of tissue in each brain, Dr. Tang counted the number of tiny spines that branched from cortical neurons. She found that, by late childhood, the spine density had decreased by half in the control brains. But in the patients with autism, the density only decreased by about 16 percent.

“It is the first time that anyone has looked for, and seen, a lack of pruning during development of children with autism,” David Sulzer, PhD, professor of neurobiology in the Department of Psychiatry, Neurology, and Pharmacology at CUMC and lead author on the study told Science Daily.

Because these points where neurons connect and communicate have such a profound effect on how the brain functions, the researchers believe that the excess synapses are linked to the behaviors found in those diagnosed with autism. Pruning them could reduce or dampen those behaviors, and researchers from CUMC believe they may have fond a drug that could do it.

According to the researchers, they found some important clues behind why the pruning process is slowed in children with autism; cells use autophagy (a Greek term that means self-eating) to degrade their own unnecessary components. They believe this function is hindered in the brains of autistic children because they found brain cells filled with old and damaged parts that were very deficient in autophagy.

Using mouse models of autism, researchers linked that pruning defect to a protein called mTOR, which, when overactive, has been found to decrease the brain’s self-eating ability. Study authors said this same over-reactive protein was also found in all of the brains of autism patients, which means that the very same deficiency in self-eating may be responsible for autism behaviors.

“While people usually think of learning as requiring formation of new synapses, the removal of inappropriate synapses may be just as important,” Dr. Sulzer said. “What’s remarkable about the finding is that hundreds of genes have been linked to autism, but almost all of our subjects had overactive mTOR and decreased autophagy, and all appear to have a lack of normal synaptic pruning. This says that many, perhaps the majority, of genes may converge onto this mTOR/autophagy pathway, the same way that many tributaries all lead into the Mississippi River. Overactive mTOR and reduce autophagy, by blocking normal synaptic pruning that may underlie learning appropriate behavior, may be a unifying feature of autism.”

According to Dr. Alan Packer, PhD, senior scientist at the Simons Foundation, which funded the research, the study is a vital step forward in understanding what is happening in the brains of autistic children.

“The current view is that autism is heterogeneous, with potentially hundreds of genes that can contribute. That’s a very wide spectrum, so the goal now is to understand how those hundreds of genes cluster together into a smaller number of pathways; that will give us better clues to potential treatments,” Packer told Science Daily. “The mTOR pathway certainly looks like one of these pathways. It is possible that screening for mTOR and autophagic activity will provide a means to diagnose some features of autism, and normalizing these pathways might help to treat synaptic dysfunction and treat the disease.”

Researchers on the study believe that this treatment could come in the form of a drug called rapamycin. Though its side effects may preclude use in some patients with autism, it may help to restore the brain’s pruning process. In fact, it has already been proven to improve the autistic-like behavior of study mice, even when the drug was given after the behaviors had started appearing.

“This is an important finding that could lead to a novel and much-needed therapeutic strategy for autism,” Jeffery Lieberman, MD, Lawrence C. Kolb Professor and Chair of Psychiatry at CUMC and director of New York State Psychiatric Institute, who was not involved with the study, told Science Daily.

“The fact that we can see changes in behavior suggests that autism may still be treatable after a child is diagnosed, if we can find a better drug,” Sulzer said.