There is no denying the damage the sun can do to your skin if left unprotected on a hot day, but that fact – it appears – is being lost on the younger generation.  A new report studying the use of sunscreen by teenagers shows that the number of teens using sunscreen in the US decreased by 12 percent in the last decade. At the same time the use of indoor tanning beds barely decreased. 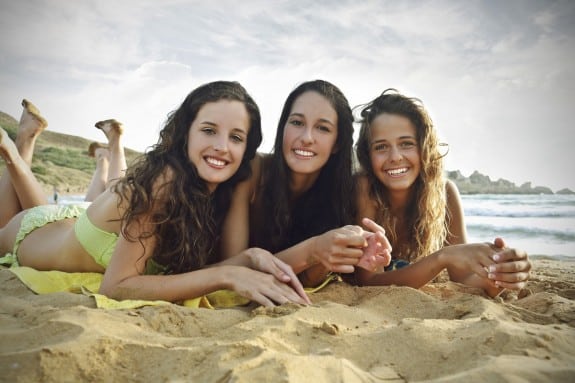 “Unfortunately, we found a decrease in the overall percentage of teens who reported wearing sunscreen, from 67.7 percent in 2001 to 56.1 percent in 2011,” said lead researcher Corey Basch, an associate professor in the department of public health at William Paterson University in Wayne, N.J.

The researcher said that indoor tanning and failure to use sunscreen increase the risk of skin cancers, including deadly melanomas.

“Using sun-protective behaviors like applying sunscreen and avoiding intentional exposure to tanning devices will be key [to lowering cancer risk],” she added.

She also said that the use of indoor tanning beds only decreased slightly from 37 percent in 2009 to 29 percent in 2011.

The research did not find the reason for the decrease in the use of sunscreen and it might be clearer with future research. However the study indicates that teens continue to put themselves under risk by not protecting their skin.

“High school years are important years that can impact the future,” Basch said. “High school students are starting to make decisions for themselves. This research and other research suggest that adolescents continue to put themselves at risk.”

The report was published in the August issue of Preventing Chronic Disease, a publication of the U.S. Centers for Disease Control and Prevention.

Dr. Jeanine Daly, a dermatologist at North Shore-LIJ Health System in Manhasset, N.Y said she was surprised to see the drop in the sunscreen use despite all the warnings given against the UV exposure.

“It’s still in vogue to have that suntanned color,” she said.

“No matter how hard we’ve been trying to get that message out, we need to keep at it and work harder,” she said. “The bottom line is that skin cancer is largely preventable.”

She adds that teenagers must know that the best sunscreens are those that protect against both UVA and UVB rays as both are involved in skin cancer.

The doctor also advices to use sunscreen every two hours as its affect do not last very long.

“The average tube of sunscreen is usually only four to six ounces — that should last maybe a day at the beach, but for a lot of people it lasts the entire season. We are just not using enough,” she said.

For the study, researchers used the Youth Risk Behavior Surveillance System to collect data on the use of sunscreen and tanning devices from a sample of U.S. high school students.

The news comes on the heels of a new video created by British-American photographer and writer Thomas Leveritt titled “How the Sun Sees You,” which shows various people’s skin through an ultraviolet camera.  The experiment was designed to show how the sun sees your skin. The camera, which was setup in New York City, showed faces dotted with spots and freckles, which hadn’t previously been seen in the mirror, and clusters of melanin, a skin pigment that absorbs UV rays.

The next portion of the video shows the same people applying ‘black paint’ on their faces. But instead it’s not paint – it’s sunscreen shown under the same ultraviolet camera.  Sunscreen is designed to absorb UV radiation  – much like the color black, which absorbing all of the light’s energy, rather than reflecting it.

It’s a pretty powerful video(below), and hopefully teens, and people of all ages heed its warning and start to protect their skin.