As the holiday season was in full swing, one Alberta couple, Viktor and Aneta Urich welcomed their 100th grandchild, little Henry Uruch. He is the ninth child of Tatjana and Heinrich Urich. Heinrich is one of Viktor and Aneta’s 16 children. 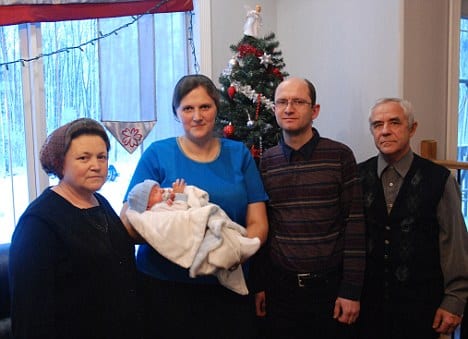 Could you imagine having a family that large?!

Keeping names straight must be interesting in a family this large!

When asked how he does it, Viktor laughed, saying, “Sometimes when I look, I say ‘What’s your name?’”

But having so many names to keep track of is only part of the problem when trying to keep names straight. Viktor says that part of his struggle has to do with the fact that he and his wife originated in Russia, so Russian names are easier for him to remember than the English names given to some of his grandchildren.

But hey! At least family gatherings are fun, right?

Most of the family does live in the area, so they do get together for special events. Viktor admitted, however, that they often have a hard time finding a place large enough to gather. Generally, they choose outdoor locations like the park, and if that fails, they head over to the local Russian Orthodox Church.

The church is where the family plans to meet to welcome the newest addition to their family at the end of this month. “We will have a party in church, all people together,” said Viktor. “We will pray together, a big thank you to God.”

Record or no record, congratulations to the Urich family and well wishes for little Henry – the 100th grandchild welcomed into the family.