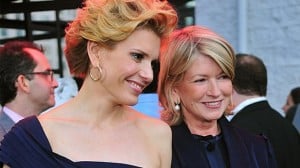 Born almost exactly a year apart Alexis, 46, will undoubtedly have her hands full with a toddler and a newborn at home.

A couple of years ago she spoke publicly about her struggle to become a mom. At that time she described her eggs as ‘hard, old and crusty’. It was not revealed if her eggs were fertilized or if she used donors for everything.

Regardless, she now has two healthy children, something she has hoped for, for many years. The new baby will join Alexis’ daughter Jude, who was born March 8, 2011.

We wish her the best and can’t wait to meet the new addition!