I am not sure how I feel about this study. The journal Obstetrics & Gynecology is reporting that amniocentesis performed during the fourth through sixth month of pregnancy, known as the “midtrimester,” does not increase the rate of miscarriage. 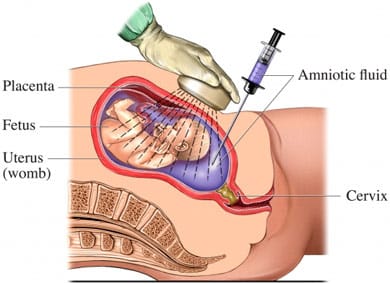 Amniocentesis involves the insertion of a needle into the mother’s abdomen and then into the uterus to obtain a sample of the amniotic fluid that surrounds the developing baby. This fluid can be analyzed to determine the presence of chromosome disorders, such as Down’s syndrome, as well as the sex of the baby.

Although the pregnancy loss rate attributed to midtrimester amniocentesis is usually quoted as just 0.5 percent, the authors point out, many doctors still consider this to be an overestimate.

To investigate further, Dr. Keith A. Eddleman from Mount Sinai School of Medicine, New York and colleagues used a large database to estimate the pregnancy loss rate after midtrimester amniocentesis. About 3,000 women who underwent amniocentesis were compared with more than 31,000 who did not.

Eddleman told Reuters Health that “we need to move away from the concept of using age alone to determine who should be offered amniocentesis.”

Overall, the researchers conclude that “this study provides the best possible contemporary information about procedure-related loss rates after amniocentesis and calls into question the relevance of commonly quoted higher loss-rates from older studies.”

The only part of this is not included in this study is complications. Here is a list of complications and/or risks to having the procedure done.

Although some of these complications are rare, an amniocentesis can have an effect on your pregnancy. Leaking fluid is something that cannot be fixed and an infection can cause the baby to arrive too early.